By Mark Corroto
November 14, 2020
Sign in to view read count 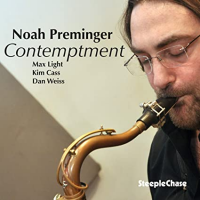 If you followed saxophonist Noah Preminger's early career you might have read an interview where he revealed his fascination with boxing. The fact that he trained in the sweet science for nearly a decade while making music is evident in the pugilistic blues heard on self-released albums Pivot: Live At The 55 Bar (2015) and Dark Was The Night, Cold Was The Ground (2016). On those two recordings and Genuinity (Criss Cross, 2018), he had a perfect sparring partner in trumpeter Jason Palmer. As he has progressed and his music has seasoned, the brawl has been displaced by the brain and the aggression has diminished while the complexity increased, evidenced by the Chopin Project (Connection Works Records, 2017) and his mini—masterpiece Zigsaw: Music Of Steve Lampert (Self Released, 2018).

With Contemptment Preminger comes back to the quartet format with his longtime bassist Kim Cass and the return of drummer Dan Weiss, but Palmer's trumpet is replaced by the guitar of Max Light. The music swaps sparring for a consensual dance and this may be a better way to display the immense talent Preminger possesses. The disc opens with "The Late 90s," as homage to the state of jazz at the close of the 20th century where Preminger and Light have clothed themselves in the sounds of Mark Turner and Kurt Rosenwinkel. From there the quartet explores every possible time signature with "Hygge," performing a kind of musical chairs with tempo. "Kamaguchi," most likely written for bassist Masa Kamaguchi, opens with the gentlest guitar phrases of Light before Preminger and Cass perambulate a most charming melody together. The gentleness continues with a cover of the Red Hot Chili Pepper's "Porcelain," where Preminger's breathy tenor floats over the atmospherics created by Weiss and Light. The title track finds a very busy rhythm section unable to disturb the self—possessed tenor man. Sonny Sharrock's "Promises Kept, the final track, opens with an amazing Preminger solo flight before the quartet engages in a most crafty and (can we say 'comforting'?) swing. Sounds like they could have danced all night.