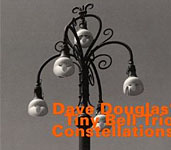 With trumpeter Dave Douglas' 21st century star continuing to rise, the hatOLOGY reissue of his Tiny Bell Trio recording Constellations serves as a reminder of the not too distant past. Hearing Douglas, guitarist Brad Shepik, and drummer Jim Black circa 1995 provides the context in which to consider their more recent efforts.

At the time of this recording, Douglas' restless sound found avenues for expression in John Zorn's Masada, Parallel Worlds (a string group), the chamber ensemble Charms Of The Night Sky, a jazz tribute sextet, and his electric suite band Sanctuary. Tiny Bell Trio was labeled a Balkan Jazz band for its Eastern European impulse, but if the starting point is Yugoslavia, the destination of this music is certainly the New York Downtown scene.

Shepik's authority is heard throughout this session. His interests in Eastern European music continued on with bands like the Paradox Trio (that added klezmer and gypsy music), The Commuters (Middle-Eastern), and his world music effort Human Activity Suite (Songlines, 2009).

Where the music of Douglas continued on into various projects he relied less on the exotic repertoire heard here and more on his expansive tone and the depth of the musicians he could recruit to construct situations for creating music.

Listening to Constellations, the best of the four Tiny Bell Trio recordings, Douglas displays his patented slur and growl trumpet technique. Heard here, he sounds more aggressive than his 21st century version. Maybe it is the political subjects heard on "Taking Sides" (genocide) or "Maquiladora" (Mexican sweat shops) that incite the pugnacity, but the band is motivated to tear through most of these tunes. They even take Herbie Nichols' bop tune, "The Gig," at break-neck pace. The highlight here might be the trio's interpretation of Robert Schumann's "Vanitatus Vanitatum (mit Humor)." Its relaxed pace and Black's swing predicts the future direction of so much music of Douglas' music.