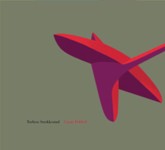 Patient jazz can be both restrained and determined. But, maybe the best word to describe the jazz of saxophonist/clarinetist Torben Snekkestad is persistent.

The thirty-something Norwegian reeds man is both a classical and jazz composer playing in the Copenhagen Saxophone Quartet, London Improvisers Orchestra, Trygve Seim Ensemble, and Among Machines with Thomas Stronen. Conic Folded is his debut featuring the saxophonist in a solo, duo, and trio setting with pianist Jon Balke (who has played with Arild Anderson and Magnetic North Orchestra) and bassist Jonas Westergaard (featured with Michael Blake's Blake Tartar).

The obvious connection here is to both Jimmy Giuffre and Evan Parker, for both sound and dedicated improvising. Snekkestad is a calm performer taking much off this music from an abstract and often decaffeinated perspective. His playing partners, also sympathetic, rarely push the pace, coloring with often shy textures and tones.

Swing is not the point here, the extraordinary technique is. Seemingly, any other approach would overshadow the remarkable improvisations. The title track opens with Snekkestad weaving an Evan Parker tapestry of free association that comes off as unconstrained yet logical. When Blake enters, he does so with simpatico, dancing similar notes off the soprano saxophonist. Inspired by the great Evan Parker, this composition and the circular breathing on "E.P. Flowers" delves deeper in to the Parker bag.

The trio has sights set beyond a mere tribute record. They deliver a chamber-like dirge on "September" that crawls achingly into your ears. The prepared piano on "Undercurrents" forces the sound into waves of reverberation and indistinct noise, creating yet another emotional sequence. The trio does refer to the blues on "Zobob," with an almost swinging jauntiness that jolts one back into the jazz realm.

Conic Folded is a fully formed collection of saxophone and improvisational mastery.