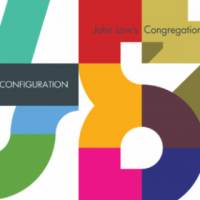 Law has been performing since the 1980s, releasing over 40 albums, some solo, others featuring a host of collaborators including Andy Sheppard, Asaf Sirkis and Tim Garland. Configuration is this quartet's first release (although a different line-up, called John Law's New Congregation, released These Skies In Which We Rust on 33Xtreme in 2015).

Law's discography includes interpretations of other composers' works, notably Johann Sebastian Bach's "Goldberg Variations." Congregation, however, plays Law's original compositions (with a little help from a Bach sample on "Disfigured Bass"), which range from the meditative and melodic ("Scandinavian Lullaby," which does have its somewhat more mysterious moments as well) to dynamic, driving rhythms ("Processional," which mixes this drive with some lovely arco bass, and "The Kiss"), jazz-funk grooves ("Jazzshh..."), hypnotic combinations of electronics, keyboards and guitar ("And Them") and gentle, classically-infused piano ("These Rolling Clouds"). It's a varied collection, a reflection of the leader's wide-ranging influences and musical experiences, where judicious combinations of instruments combine in often surprising and always enjoyable ways.

"Congregation" may suggest a group of people coming together to worship, with an accompanying seriousness of purpose. The band clearly takes its music seriously, but there's no sense of a po-faced approach to performance or composition. There's a positivity and playfulness (Morton's term) to Configuration, an uplifting mood. After all, as Morton also notes, "congregation" is the collective noun for a group of plovers, small wading birds whose antics never fail to brighten up a dull day, however serious their purpose might be.

The Kiss; And Them; Configuration; Scandinavian Lullaby; Processional; Jazzshh...; Disfigured Bass; Through A Glass Darkly; Complex City; These Rolling Clouds; The Kiss (Memory Of A Kiss).