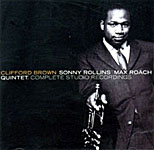 Even now, fifty-three years after Clifford Brown's untimely death (a multiple tragedy that also took the lives of pianist Richie Powell and his wife), his recordings are still being mined for fresh—or rather, refreshed— releases. Although it's not entirely clear why this particular lineup merits this particular release at this particular time, any Brownie is good Brownie.

That said, this is a release for neither longtime jazz listeners nor Brown devotees. It combines two easy-to- find 1956 albums, Clifford Brown and Max Roach at Basin Street and Sonny Rollins Plus Four, that will already grace most jazz collections in one form or another. Here, oddly, the track listing is out of sequence with the original releases. "Count Your Blessings," from the latter disc, is highlighted as a bonus track, presumably just because Brown sits it out. The proper bonus tracks from the 2002 rerelease of At Basin Street—alternate takes of four of the songs—are not included on account of the already high 79-minute running time. The original liner notes from the two source albums, however, are enclosed, which is the least one might expect. The new, brief liner notes by Leon Trump don't attempt to justify this double album's release or even explain why the track list has been rearranged.

For the casual jazz listener or the newcomer who's just beginning to build a collection, this disc is...well, the label doesn't call itself Essential Jazz Classics for nothing. At Basin Street is both essential and classic, and the same could easily be said of Plus Four. At Basin Street's "I'll Remember April," sculpted out of a spontaneous Morse code-like Powell vamp, has fantastic ensemble playing and a stellar solo from Max Roach in particular. "Gertrude's Bounce" opens like a cross between a Christmas carol and '70s game show tune until Brown, frisky and indefatigable as ever, carries things forward with a breathless solo before segueing seamlessly to Rollins; the saxophonist then gives it to Powell (often a far more exciting arranger than soloist), who finally passes off to Roach, who, in his trademark style, maintains both distinct melody and impeccable rhythm.

The Plus Four portion of this disc begins, more fittingly, with Rollins' arrangement of Dorothy Fields' standard, "I Feel a Song Coming On," instead of his own "Valse Hot." Even though the performers for this session are the same who recorded only one or two months earlier for At Basin Street, it's just amazing how much this incarnation of the quintet has its own identity with Rollins at the helm. There's something about it that feels freer, more raucous, more whimsical, like when the bottom falls out of "Pent-Up" house, leaving just Brown and George Morrow (yes, Roach crashes in too from time to time); Brown springs from the individual bass notes as if leaping from cloud to cloud. Although not perfectly packaged, this two-for-one album is nevertheless strong where it counts: the playing.