BY EDWARD BLANCO
February 13, 2010
Sign in to view read count 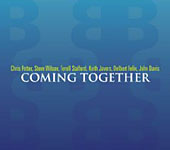 Brendan Edward Romaneck was a young twenty-four-year-old saxophonist and composer preparing for his first recording date in the spring of 2005, when on April 20th he passed away just two weeks after his birthday. Coming Together was to be Romaneck's debut disc, containing eight original compositions and three covers. It now serves as a tribute to the young man, when his parents moved forward with the project in memory of their son. Romaneck had already lined up trumpeter Terell Stafford, bassist Delbert Felix, drummer John Davis and pianist Keith Javors—a primary influence on Romaneck's writing. For the lead saxophone parts, Javors—who also serves as producer here—called on Chris Potter and Steve Wilson, of whom Javors states: "[are] beautiful artists and both a good fit for the style."

Harold Arlen's "My Shining Hour" was chosen as the opening piece in reference to its poignant lyrics "This will be my shining hour 'til I'm with you again," the heartfelt meaning of what this recording would have been for the young saxophonist. It is Potter—who provides the saxophone lead in the first recording session, resulting in Coming Together's first six pieces—who lends a bit of shine with his tenor lines.

Javors does the honors on the first Romaneck piece, with a light introduction to "Dream Behind The Winter," followed by Potter's emotional play on the soft melancholy ballad of "Full Moon." Demonstrating Romaneck's skill as a composer, "3 Steps Ahead Of The Spider" is a sophisticated piece of music with changing rhythms and tempos, also featuring Potter on an expressive soprano outing.

Javors and Potter perform a duet in an especially warm and memorable rendition of the standard "Nancy (With The Laughing Face)." Stafford and Wilson, on alto, finally make their appearance on the title track—the first of the second date recordings, which include some of the young saxophonist's most vibrant and challenging compositions. "The Vibe" turns out to be essentially a straight-ahead number showcasing Felix and the horns, while the nine-minute plus "Minion," a spacious and intricate musical trek, is perhaps the album's most ambitious tune. Javors recalls that Romaneck enjoyed playing the seventies soul classic "Killing Me Softly With His Song"; not known as a favorite amongst jazz instrumentalists, it is performed here as an emotional duet between Javors and Wilson on soprano.

The program ends with the late artist's take on the blues in the hard-swinging up-tempo burner, "11-02," climaxing a tribute to this remarkable young man with so much promise. Sadly, Romaneck did not live long enough to hear the powerful raw energy of his music, expressed in this exceptional session of modern jazz. It was left to pianist/producer Javors, saxophone stalwarts Potter and Wilson, and the rest of the group to add the final brush strokes to Romaneck's unfinished musical canvas and, in Coming Together, complete this masterpiece of a recording, befitting the memory of this gifted artist.

My Shining Hour; Dream Behind The Winter; Full Moon; 3 Steps Ahead Of The Spider; Nancy With The Laughing Face; You'll Never Know; Coming Together; The Vibe; Minion; Killing Me Softly With His Song; 11-02.