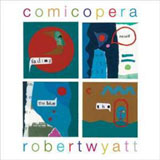 More ambitious than anything he's done before while, at the same time, more interactive, intimate and live sounding, Comicopera represents another milestone for singer/songwriter Robert Wyatt. It's not just that he's using a larger group of musicians for the record, making for the broadest musical canvas yet; but this three act opera (of sorts) consolidates many of the personal, social and political issues that have occupied his work since Rock Bottom (Virgin, 1974).

Wyatt began his career as a drummer and vocalist for Soft Machine, but an accident in the early 1970s, after he'd left the British group, left him paralyzed from the waist down. Rather than the devastating blow such a tragedy would mean for most, Wyatt has remolded his career by learning a variety of musical instruments (and playing a percussion set-up that requires only his arms), and by evolving as a songwriter for whom there's little comparison. It isn't folk music, it isn't pop or rock music, it isn't jazz: it's simply Robert Wyatt music. Dealing with adversity as he has, one almost wonders if he'd have developed as such a distinctive artist had he not suffered the loss of his legs.

The first two acts consist largely of original music by Wyatt and longtime lyrical/life partner Alfie Benge, although the disc opens with Norwegian pop singer Anja Garbarek's "Stay Tuned, which acts as a dark overture—rich in texture, melancholy in tone. From there the music incorporates relationship realism and pop simplicity ("Just as You Are ); the compositionally complex "You You, a subtle nod to his classic "The Moon in June featuring a brief but selfless solo by clarinetist Gilad Atzmon; the beginnings of distrust in "A.W.O.L, with Wyatt's trumpet meshing with trombonist Annie Whitehead; and a touch of swing on the instrumental "Anachronist While Wyatt's distinctive falsetto is heard throughout, it's balanced by more low-register singing than usual, and the fragility in his voice has never been more evocative.

The second act features the near-folk of "A Beautiful Peace, a cynical take on religion with the bluesy swing of "Be Serious, and a curious mix of steel pans, saxophone and garage guitar in "On the Town Square. Things turn darker still on the spare "Mob Rule, the paradoxically buoyant "A Beautiful War and more chaotic "Out of the Blue.

Wyatt shifts to singing in Italian and Spanish on material largely by Italian, Spanish and Cuban writers, as he searches for meaning in the world, closing with a brief reprisal of "Just as You Are ("Fragment ) and "Hasta Seimpre Comandante, a hymn to Che Guevara. Whether or not you agree with Wyatt's politics, it's impossible to ignore the understated power and rich concept of Comicopera. It's a near-cinematic song cycle that, at the end of the day, may be the closest thing to a pop album Wyatt's made. Still, its stylistic diversity and combination of well-conceived arrangements and unequivocal team playing make it one of the best records of his career.

ACT ONE (Lost in Noise): Stay Tuned, Just as You Are, You You, A.W.O.L., Anachronist; ACT TWO (The Here and Now): A Beautiful Peace, Be Serious, On the Town Square, Mob Rule, A Beautiful War, Out of the Blue; ACT THREE (Away With the Fairies): Del Mondo, Cancion de Julieta, Pastafari, Fragment, Hasta Siempre Comandante.