The Sirkis/Bialas International Quartet: Come To Me 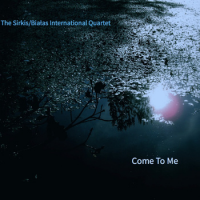 Drummer/composer Asaf Sirkis, whose last album from 2013 was the highly acclaimed Shepherd's Stories is back with new group, co-led by the extraordinary Polish vocalist, composer and poet Sylwia Bialas.

The album consists of ten journeys, they are much more than tracks, which contain many moments of intense yearning, sorrow, happiness and love.

The compositional credits are shared equally by Sirkis and Bialas, with Bialas also contributing five poems in Polish, and while this music is a band effort, (Frank Harrison on piano and keyboards has many moments to shine as does Patrick Bettison on bass and chromatic harmonica) it is the dual leaders who naturally stand out.

Sirkis' drumming is very subtle and razor sharp throughout, even when the energy rises, as in "Vortex," but it is Bialas' singing and vocalizations which (naturally) captures the most interest.

Her voice is an astounding instrument, crystal clear throughout its wide range, with a very sparing use of a tight, controlled vibrato. She can whisper as easily as soar, and Polish never sounded so enchanting.

The music is highly emotional, with long-limbed melodies that unfold slowly, encircling the sound stage. Time stops for the duration as the music uncovers multiple layers of meaning starting with "Come To Me" and ending with "Orgon."

The Sirkis/Bialas International Quartet has a sound all its own, despite having influences from all over the world. This sound is one of beauty, love and hope (from "Come To Me"):

About The Sirkis/Bialas International Quartet