Home » Jazz Articles » Coltrane: The Story of a Sound

Coltrane: The Story of a Sound

By Joel Roberts
November 4, 2007
Sign in to view read count 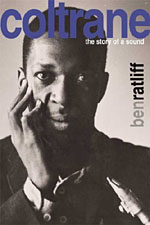 New York Times jazz critic Ben Ratliff's new John Coltrane study is really two books in one. The first is a concise, convincing assessment of the evolution of Coltrane's music from his early days as a not particularly distinctive bebop saxophonist through his apprenticeships with Miles and Monk to his seminal achievement with the classic quartet of the '60s and his final role as a free-jazz trailblazer.

The second, more important part, examines Coltrane's legacy and what it was that's made him not just one of the major figures in jazz, but also arguably its most revered, even worshipped artist, considered by some to be, in Ratliff's term, a "near-saint . Drawing on interviews with Coltrane peers, as well as younger musicians, Ratliff places Coltrane's musical breakthroughs within larger cultural and political contexts, while also considering where the Coltrane influence stands today. (Ratliff's view: the Coltrane influence remains strong on today's jazz scene, though it's no longer quite as pervasive as a generation ago, when his contemporaries were often overwhelmed and overshadowed by his memory.)

Perhaps most significantly, Ratliff stresses that for all Coltrane's individual virtuosity and deeply personal vision, his triumphs, like those of Duke Ellington, were achieved within the context of a working band. Coltrane always had a group of highly talented and receptive musicians at his side that played an essential role in helping him work out and develop his sound. Unlike today, these groups had the luxury of time on their side, with clubs affording them steady, if low-paying, gigs lasting from several weeks to as long as six months in the case of Monk and Coltrane's legendary 1957 stand at the Five Spot. More important for the future of jazz than record label support is the opening of clubs that let musicians "play and play and then play some more, Ratliff says. "The truth of jazz, he concludes, "is in its bands.