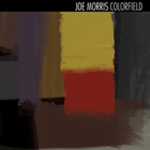 Much dirt has been spread about concrete art because it lacks heart and is almost always cold by its very nature. In music as in painting, the anomaly of art without a living soul can echo with emptiness. However there is Confucius, who praised the exactitude of concrete nomenclature, eschewing the figurative. In the case of music that may be overtones or moods, even guitarist Joe Morris' Colorfield does not stray from the path of concrete music diktats, where there's the proverbial doffing of the hat to Cecil Taylor and the era of Unit Structures
And so, while Morris—at least on this project—stays close to the painting movement and may deliberately steer clear from the imagism (however concrete) found in modern music, the constant rubbing of his melodies against the tone clusters of Steve Lantner piano say more about the lack of soul than a concrete image. However, Colorfield is more about pursuing the image of wetness and the resultant elasticity of the melodies on this disc appears to work as the music is in constant motion.

There is an almost primal intensity throughout and this is especially evident in Latner's pianism on "Bell Orange Curves," a title that remains in stark contrast with the assault of the resultant music on the auditory senses. To be receptive of the purported relative brightness suggested by the title, the eyes must be shut and the curvilinear motion of the piece be allowed to invade the mind. It is easier to associate with "Transparent," which is naked tonal music that allows any perception to become real. Morris is more spare in the notes that he plays and refrains from imitating the tone clusters that he charges with when he and Lanter get going on "Bell Orange Curves."

"Silver Sun" and Purple Distant" develop from a stark perspective and the twist is also in the manner of relaying the perception to the ears. In the former, the music is almost mechanical like a windup toy. The latter piece is more centered on the concept of pure experimental tonal clusters, with Lantner taking much of the lead. Both melodies are more conventional, albeit in the same vein as the concrete-Colorfield theme.

It would be remiss not to mention Luther Gray, who is easy to skim over, because in the grand scheme of things the drummer really replaced the bass, so that guitar and piano could be free to undertake melodic journeys. The percussionist does something more memorable than the guitarist or the pianist: he creates rare melody out of the shrewdly tuned battery of instruments, to enliven the invaluable project.