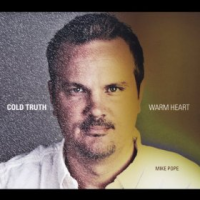 More than a decade separates Cold Truth, Warm Heart and bassist Mike Pope's previous album, but he hasn't exactly been sitting by idly and twiddling his thumbs in the intervening years. His professional life has been filled with high profile work, as he's held down the fort for everybody from vibraphonist Joe Locke to guitarist Chuck Loeb to drummer Bill Bruford during that span of time, and his personal life has seen highs and lows; the birth of his two children falls under the former heading while the stroke he suffered in 2011 tends to define the latter. With all of that in play, it makes sense that he waited so long to return to the driver's seat.

Cold Truth, Warm Heart finds Pope in good company, working with a top-shelf quintet that includes Locke, pianist Geoffrey Keezer, tenor saxophonist Seamus Blake, and drummer Mauricio Zottarelli. There's no shortage of firepower in this line-up, yet Pope doesn't push the virtuosic angle. Each man has his moment(s), and numbers like "Ral And Tonto (For Ricky And Nicky)" serve as a firm reminder that Pope's playing can turn deadly at any moment, but this is no thrown together blowing session for heavyweights; it's far deeper than that.

The journey begins with the title track, which features a through-composed solo section underscored by a Latin-ish rhythmic current. Then comes the full-on funk of "Shadow Of A Doubt," the relatively straightforward "Bare Minimum," and pianist Alan Blackman's intoxicating arrangement of Reinhold Gliere's "Romance." Things take a turn for the mellow on "What I Meant To Say," which sits at the midpoint of the album, and the nebulous becomes tangible as "Out Of The Ether" develops. Blackman takes Keezer's place on Pope's reflective, partly-loyal/partly-new arrangement of Chopin's "Prelude In E Minor, Op. 28, No. 4," but Keezer's back on the bench for a slick and off-kilter fusion number ("Ral And Tonto (For Ricky And Nicky)") and the album-ending "Dear Life"—Locke's moving, Blake-fronted tribute to the late Bob Berg.

Given the musicians involved, it should come as no great shock that this one is a solid and satisfying listen from start to finish; Cold Truth, Warm Heart is an out-and-out winner.

Cold Truth, Warm Heart; Shadow Of A Doubt; Bare Minimum; Romance; What I Meant To Say; Out Of The Ether; Prelude In E Min. Op. 28 No. 4; Ral And Tonto (For Ricky And Nicky); Dear Life.