Maximize your visibility at All About Jazz by upgrading your musician page from standard to premium. With it, you'll receive All About Jazz home page exposure, a highly stylized / ad-free musician page with bonus features and benefits, an ad, plus you control where you sell your music and so much more.
Learn More
184

BY WOODROW WILKINS
August 25, 2010
Sign in to view read count 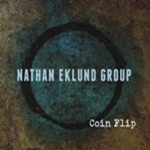 Nathan Eklund, a New York-based trumpeter, has earned credentials as both a student and an instructor. Among his associations are Joe Lovano, Craig Yaremko's Sync, Richie Cole, Gerald Veasley and Chuck Loeb. He leads two ensembles: the Nathan Eklund Group; and the Nathan Eklund Quintet. His fourth release as a leader, Coin Flip, features the quintet.

"Professor Dissendadt" opens broodingly, with bassist Kellen Harrison only, then joined by Steve Myerson on Fender Rhodes and eventually the rest of the band. Eklund and saxophonist Craig Yaremko blend the melody as the pace picks up and becomes more playful. Yaremko solos on alto, at times delivering some high-speed rolls. Eklund and Myerson also solo, both more subtly, accompanied by soft rhythm section support. After a bit more melody, the rhythm section shares the spotlight, setting up the song's closing sequence.

Yaremko dons the tenor for "Triple Shot Espresso." After the high-gear opening, he puts the sax through an intense solo, followed by Eklund, whose play is softer but no less engaging, cranking up the energy when the bass and Rhodes rejoin. Shawn Baltazor works out on the kit, occasionally accented by the other musicians.

Yaremko (on soprano) overlaps Eklund on the melody of the moody, sentimental "A Year Ago Today." After their lead sequence, Harrison goes it alone on, the band returning with Eklund out front, his solo segueing into the song's overlapping melody. Myerson then takes point, punctuated by some timely cymbals. Yaremko solos, making the sax wail at key points.

Having composed all nine tracks—ranging from just under five minutes to more than eleven, Coin Flip demonstrates Eklund's skill at songwriting. This not only gives the soloists plenty of opportunity to stretch out, but optimizes group interactivity.