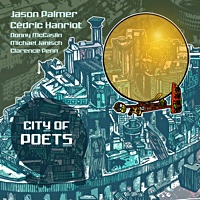 The formal structure of this album recorded live at London's Pizza Express Jazz Club on September 23, 2014, centres around Olivier Messiaen's Seven modes of limited transposition, musical modes or scales that fulfil specific criteria relating to their symmetry and the repetition of their interval groups. As with George Russell's Lydian chromatic concept of tonal organization much has been written about this, so this review will confine itself exclusively to the music.

The titles of the nine pieces take their origins from US author Dan Simmons' four-novel science fiction series Hyperion Cantos, reflecting Simmons' literary themes of pilgrimage, not unlike a modern day or futuristic Canterbury Tales.

Co-leader Jason Palmer has been a ubiquitous name on the jazz scene for 15 years, working with names such as Herbie Hancock and Jack DeJohnette. He also played on virtuoso bassist and producer Michael Janisch's highly acclaimed CD Paradigm Shift (2015) and Janisch's 2009 debut album Purpose Built both released on Whirlwind Recordings. City Of Poets also acts as a follow-up to French pianist and co-leader Cédric Hanriot's 2011 album French Stories which featured Terri Lyne Carrington and John Patitucci.

The opener, "The Priest's Tale (Mode II)" with a backdrop of pulsating rhythm including Michael Janisch on bass guitar, Donny McCaslin's fiery tenor saxophone solo borders on late-period John Coltrane such is its ferocity. The mood calms down for "The Soldier's Tale (Mode IV)" with Janisch reverting to double bass and Cédric Hanriot producing a keenly absorbing piano solo, his stylistic influences seemingly ranging from (but not limited to) Bill Evans to Ahmad Jamal. A Palmer trumpet solo follows and he is heard again, soloing alone on the brief "The Poet's Tale (Intro)" which naturally segues into "The Poet's Tale" and here Donny McCaslin gives another serpentine tenor solo. It's also here that in-demand percussionist Clarence Penn is heard employing fractured call and response bursts of dramatic drumming.

The languid "The Scholar's Tale (Mode III)" sees Janisch back on bass guitar and Palmer evincing a mellifluous solo. On the short "The Detective's Tale (Intro)" it's Janisch's turn to solo, here on pizzicato double bass, which serves as an introduction to "The Detective's Tale" in which its elegant ensemble opening is pursued by another strident Hanriot solo (and given due appreciation by the audience). "The Consul's Tale (Mode VI)" opens with wistful piano and trumpet and continues in that ruminative vein via solos from McCaslin and Palmer. The set concludes with a robust "The Shrike" again with Penn producing some more melodramatically staccato-like drumming and Palmer leading the solos with forcefully vibrant trumpet, followed by rapidly alternating McCaslin and Hanriot solos.

It surely must have been a great gig to witness, because with the combination of excellent compositions, outstanding solos and a band of internationally renowned musicians performing on absolutely top form, the enthusiastic audience response heard occasionally between tracks was clear confirmation of the unequivocal success of the performance.

About Jason Palmer and Cédric Hanriot