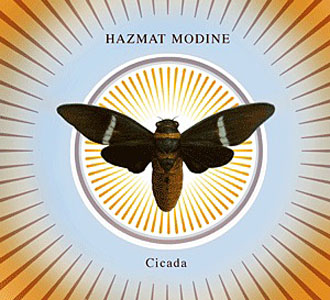 To call this band is eclectic is a understatement; to call it spectacular is a simplification; to say it is led by a mouth-harp duo is approximating a partial truth, but ignores the other seven people that comprise the troupe, not to mention ten other "past, adjunct and intermittent Hazmaticians!" However, the start and end has to be leader and mouth-harp extravaganzist Wade Schuman who, with his wails and howls, vocal and instrumental, owes as much to Tamla Motown as to he does Blue Note Records.

Distinct from most commentators, Schuman characterizes Hazmat Modine not by genre, but by origin— "because of the eclectic nature of the band and its instrumentation [it] is very New York." However, it's in continental Europe that the group has built its most solid fan base, touring summer festivals and smaller venues regularly, with this sophomore album released both there and in New York.

The title suggests a metamorphosis transformation of embryonic forms into the fully flighted creature. Pieces such as the title track or "Child of a Blind Man,'' where the band is joined by Natalie Merchant and ska-styled Gangbé Brass Band, depict just such a delicate evolving creation. But the style, typically deemed "unclassifiable," is more that of a swarm—beautiful in its intricacy, multiple in its sources and overwhelming in its effect. That Schuman is able to take such a juggernaut from concert stage to bandstand across two continents says as much for his stamina as it does his musical vision.

Most of the other members have other obligations to fulfill between an array of New York scenes, ranging from the Philharmonic Orchestra to the Latin jazz of Grupo los Santos. With such a repertoire of member talents and his own grounding in all forms of Americana to draw from, Schuman has taken over twelve years to build up the stability of his personnel. This now gives him the opportunity to broaden his own compositional palette—with all but two of the tracks under his name—but also to draw on the compositional input of almost all other band members. The Hazmat style certainly gravitates around his personage, and the Bowery lyrics are almost exclusively his, but it is truly the interactions between the whole band that makes it so vibrant both live and on disc. Even if Cicada doesn't surpass the novelty or the awards of the group's debut, Bahamut, it is a CD of spectacular aural aurora; one that brings an authentic, multi-referenced, American approach to the concept of world music. If there's any doubt, the closing "Dead Crow" even features the Kronos Quartet.