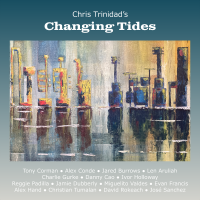 During the course of 2021's lockdowns and distancing, music educator and bassist Chris Trinidad began to wonder if technology was bringing people together or keeping people apart. During these reflections, he reengaged with music he had written years earlier, for a release he titled Certain Times (Iridium, 2014). "The compositions on that album were written in a span of seven days in the midwinter month of December 2013," Trinidad notes on Changing Tides. "During the liturgical season of Advent, the time in the Western Christian calendar when expectant waiting and preparations for Christmas took place."

Saxophonist Charlie Gurke (UK) and pianist Alex Conde (Spain), two musicians from 2014's baseline recording, reshape two titles that seem to predict their 2021 reimagining. Conde rebuilds "Something New in the Familiar" upon a bouncy drum beat, then polishes it with smooth rhythm guitar and Dubberly's high-stepping trombone solo into a sunny Caribbean/Latin sheen. "I remember quite distinctly Alex suggesting that we lay down this track with a more explicit funk-informed vibe," Trinidad notes.

Gurke's take on "A Reading in Retrospect" is a genuine masterpiece of understated yet swinging ensemble jazz. The trumpet issues the ensemble's first call, but echoing horns quickly follow one by one, each coming in one beat later so their accumulating sound seems to cascade like a waterfall. Bassist Trinidad overlays strong, stretchy lines across David Rokeach's drum patterns to provide a firm yet supple foundation, and pianist Tumalan swings into a jazzy spotlight that seamlessly shifts from improvisation into accompaniment to tie all the horn sections back together.

Inevitable Evolution; Something New In The Familiar; The Benefit of Hindsight; Finding Somewhere Forever; A Reading in Retrospect; Transcending December; Though Certainly Speaking.