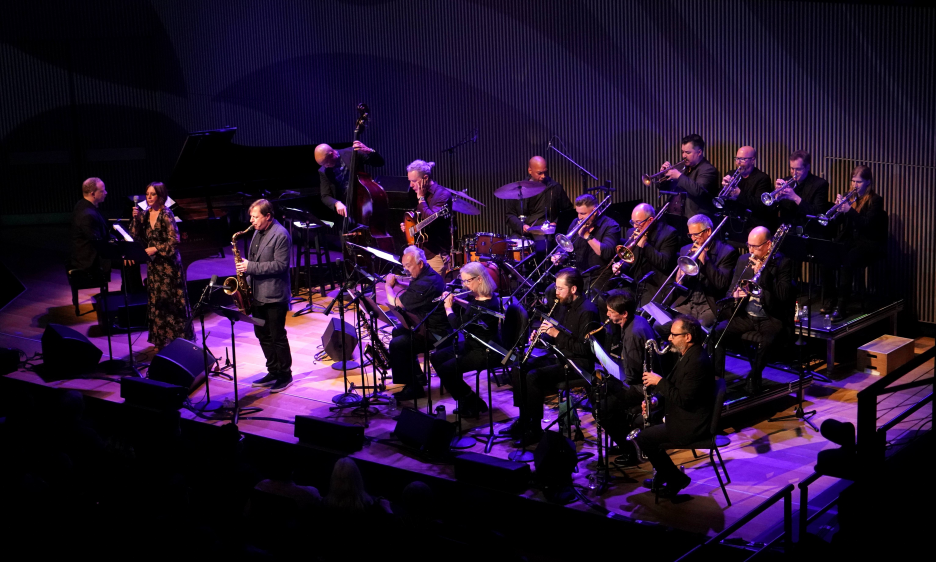 Widely acclaimed saxophonist Chris Potter needs no introduction. His fans know him as someone who is always expanding and growing. In addition to his recent role as leader of the SFJAZZ Collective, Potter has formed trios and quartets and played as a sideman with many notable jazz musicians. He's even played with Steely Dan.

As a child growing up in Colombia, South Carolina, Potter learned to love big band music, particularly reveling in the music of Duke Ellington and Gil Evans. Flash forward to adulthood and he has played with Dave Holland's Big Band, as well as with the Mingus Big Band. Now Potter has brought all of these experiences to fruition with the Chris Potter Big Band, which made its premiere performance at SFJAZZ in San Francisco for a two-night run, performing Potter's suite entitled "Sing to Me."

The first night the 19-member band—composed of local jazz luminaries, two internationally known artists pianist Craig Taborn and drummer Eric Harland, SFJAZZ Collective member vocalist Gretchen Parlato and long-time sideman guitarist Adam Rogers—filed onstage and took their places. Taborn sat in front of his piano stage right, Potter in front of him and Parlato to his left. Behind him stood guitarist Rogers and bassist Reuben Rogers. To Potter's right sat three rows of horn players: a clarinet, flute and saxophone section. four trombonists four trumpeters. Represented here were such notables as trumpeters Mike Olmos and Erik Jekabson, both of whom lead quartets that play frequently here; clarinetist Ben Goldberg, who has performed nationally; and flautist Melecio Magdaluyo, who has been a fixture on the local Latin jazz scene for decades now. Parlato's ethereal vocals, sometimes getting lost in the mix, held court over the musical montage.

After Potter introduced "Sing To Me" (to which he wrote the lyrics), sultry vocalist Parlato, clad in a a dark, flowery gown, intoned. Potter took an extended solo; Magdaluyo's flute added a layer; then the orchestra opened up. Later, Rogers soloed on guitar.

The other numbers included poems by Sappho, Paul Laurence Dunbar, Kabir Das, and Edna St. Vincent Millay. The most intriguing was probably the poem by Dunbar called "We Wear the Mask," which highlighted life in a racist society where Blacks are not permitted to show their true feelings. It featured a lovely bass solo by Reuben Rogers, a solo by guitarist Rogers and a taut beat from drummer Harland.

Parlato lifted left hand to chest while singing Dunbar's poem, and Potter offered up one of his customary amazing solos. Patrick Wolfe soloed on clarinet during the gloomy St. Vincent Millay poem. Potter occasionally conducted throughout. The nearly two-hour show concluded with Potter soloing on "Now You Have Heard" (the second tune for which he had written lyrics) before the evening concluded with a standing ovation.

Two nights later, a unique quartet took the stage at SFJAZZ. Potter had invited "some of my favorite musicians" to share the stage with him. Pianist Taborn, returning from the previous night, has played with Potter as well as with Dave Holland, and other performers such as Paul Motian. He also has a career as a solo pianist. Drummer Harland, also returning from the previous night, is a former member of the SFJAZZ Collective who has also played with Holland and Potter, as well as with such luminaries as Liberty Ellman, Ravi Coltrane, Joshua Redman and Helen Sung. Holland, of course, needs no introduction, as he is one of the best known acoustic bassists on the international scene, as leader, sideman and solo artist.

Potter began the evening with a searing, phosphorescent driven solo on "Sky," as Harland worked his drum kit; then Taborn soloed, as Potter stood to the side, then stepped back in to solo and finish. The second number, Potter's "Other Plans" came from the saying "Life is what happens to you while you are out making other plans." It featured a tautly-toned soprano solo from Potter with Holland and Taborn stepping in with a call and response, as Harland kept the rhythm. Holland offered a lovely engaging bass solo before Potter came in on tenor to conclude.

"Seven Eleven" saw a rollicking solo as Harland worked his sticks while Taborn swayed in his seat in time and Potter looked on. Potter then stepped back in to conjure up sheets of sound, ending his solo with a series of bursts. Taborn then soloed, employing his right hand rapid fire. As Holland added punctuation, Harland sat back nodding and grinning. Potter looked on as Taborn soloed before launching in on tenor with another series of bursts. NEA Jazz Master Holland then worked in tandem with Harland's stick work before Potter moved back in to solo.

Next up was a piece not yet pressed to vinyl, nor compressed to an MP3. Beginning with a jaunting solo from Potter, Harland then laid his cymbals atop his snares, producing triangle-like tones as Holland soloed as Potter stood at the sidelines before coming back to solo powerfully again, his solo punctuated by locomotive drumming from Harland before concluding.

This was followed by "Good Hope." Taborn leaned over to adjust his piano strings, eliciting soft, delicate tones atop which Potter moved in to solo. Taborn played with delicacy and melody, yet charged with urgency, invoking a jewel house of sound. Harland brought sticks to cymbals as Potter moved back in to solo vibrantly and expressively.

The next tunes continued much in the same vein—with more awesome piano from Taborn, coupled with feisty drumming from Harland, then Potter concluding the evening with another spicy solo.

A standing ovation followed, as the musicians linked arms over shoulders and the audience began to file out.