Artie Zaitz & Mark Kavuma featuring William Cleasby: Back To Back 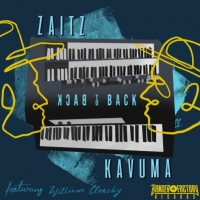 Trumpeter Mark Kavuma and his band The Banger Factory have released three of the most enjoyable and well-crafted albums to come out of London in recent years: Kavuma (Ubuntu, 2018), with The Banger Factory there in all but name, The Banger Factory (Ubuntu, 2019), made by the fully formed band, and Arashi No Ato (Banger Factory Records, 2021). But although the outfit does not qualify for "best kept secret" status, its audience base has so far remained a local one. In April 2022, two more albums come along which, too, are worthy of your attention....

On the first, Kavuma is heard on the uplifting (and previously reviewed) Legacy (Banger Factory Records), which he also produced. It features the star studded—step forward Nubya Garcia and several others—Kinetika Bloco big band, whose lineup also includes other Bangers. Kinetika Bloco is one of two grassroots music charities in London where Kavuma is a tutor (the other being Tomorrow's Warriors) and which have played crucial roles in nurturing young jazz musicians over the past twenty-plus years.

The other new album, Back To Back, comes from a stripped down Banger Factory group. The band's 2019 and 2021 albums were made with nine and ten-piece core lineups. Back To Back was made by just three members: Kavuma, Artie Zaitz and William Cleasby. And there are other differences. Kavuma plays trumpet on just one track, spending most of his time on Wurlitzer 200A electric piano (three tracks) and Steinway grand piano (two tracks). Zaitz also rings the changes, putting down his guitar to play Big Bertha, his Hammond C-3 organ. Drummer Cleasby is the only player to be heard on his regular instrument. The unusual combination of two keyboards and drums works really, perhaps surprisingly, well.

Even when the mighty Big Bertha is pulling at the leash, Back To Back is a conversational, up close and personal album. There are six tracks. The opener is "Evidence" by Thelonious Monk, one of Kavuma's heroes. Kavuma is on the Steinway. Zaitz's "Cedar Tree," a salute to pianist Cedar Walton, introduces the Wurlitzer / Hammond combination, which is continued on a spring-fresh reading of Monk's "Round Midnight" and then Zaitz's emotionally charged "Lockdown Blues" (which is not in fact particularly bluesy).

Kavuma switches to trumpet for his own "Mia's Waltz," a bittersweet ballad. The album closes as it started with the Steinway / Hammond combo revisiting Kavuma's "Church," a twelve-bar kind-of-gospel blues first heard on 2018's Kavuma. There are moments in the theme statements where the piano echoes passages on Amina Claudine Myers' sacred-secular Salutes Bessie Smith (Leo, 1980) almost note for note (in a good way).

A banging trio within the bigger band. Who knew?