By KARL ACKERMANN
September 3, 2017
Sign in to view read count 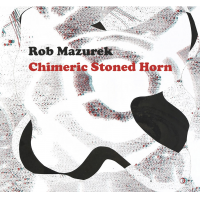 "Chimeric" is defined as imaginary or visionary and it is a fitting allegory for the surreal nature of Chimeric Stoned Horn. Composer, electronic artist, cornet virtuoso and multimedia artist Rob Mazurek's vocation in the visual field has progressively influenced his music and vice versa. These are not alter egos, but related facets of the artist and they play out organically. This solo album is a sequel to Vortice of the Faun (Astral Spirits, 2015) in that both take on acoustic and electronic components, in a highly experimental setting. Between the two albums, the prolific Mazurek has released Exploding Star Orchestra's Galactic Parables: Volume 1 (Cuneiform Records, 2016), Sao Paulo Underground's Cantos Invisiveis (Cuneiform, 2016), Alien Flower Sutra (International Anthem Recording Company, 2016), with Emmett Kelly, Blind Curves and Box Canyons (Relative Pitch Records, 2017), with Thollem McDonas and his most recent solo recording Rome (Clean Feed Records, 2017).

Mazurek's traditional acoustic instrument of choice has been the cornet though the multi-instrumentalist relied heavily on piano with Rome. On Chimeric Stoned Horn he takes up the piccolo trumpet for the first time. An octave above the B-flat trumpet, it's most common form looks closer to a pocket trumpet but with a shorter length of tubing, four valves, and it is more commonly used in classical music. On Chimeric Stoned Horn, the acoustic trumpet has only a partial presence; synthesizer (often in conjunction with the trumpet), voice and other devices occupy much of the musical space here.

The sixteen compositions play without breaks, making for one extended piece. All the better for experiencing the journey. "Arrival From a Distance"—the longest of the sixteen compositions—sets the tone. With Mazurek's wordless chant, fiery bursts from the trumpet, scratchy electronics and moments of serenity, it serves as an overture. Many of the brief tracks such as "Clap Thunder," "Fracturing Time" and "Granulate and Blue," play out as interstitial forays into the unknown. They are, at times, harrowing; transmissions disrupted by static, moments of hyperkinetic battering, launching the trajectory of the sound. In Mazurek's cosmos, they pass through reentry, occasionally landing in a sea of tranquility of his own making.

Mazurek's creative approach on Chimeric Stoned Horn opens up thematic ranges that, while not mutually exclusive, can stand alone and still invoke a cohesive spirit. There are passages where he could be channeling Pauline Oliveros, John Cage and James Hetfield together, but his overall influences are in an ethos that is personal and elusive. There is a strong noise component to the album but it is noise of a mesmerizing nature. The fragility of the piccolo trumpet against the scraping of electronics creates a musical anomaly that is both challenging and mystical. Nothing can be out of place in this alternate reality. Remarkable.

Note: The CD includes reproductions of Mazurek's original artwork series "Chimeric Stoned Horn" which will be exhibited as 3D lithographs that Mazurek created for his Constellation Scores show. The exhibit opens on September 16, 2017, at URDLA in Lyon, France and will be supplemented with this album on multiple cassette players. (The album will also be released on cassette.)