BY DOUG COLLETTE
September 9, 2012
Sign in to view read count 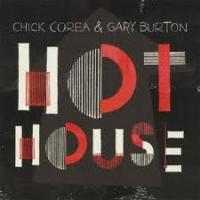 The creative connection upon which vibraphonist Gary Burton ruminates to such length, in his essay for Hot House, is evident from the first instrumental exchanges with longtime collaborator, pianist Chick Corea. Burton and Corea complete each others' thoughts throughout "Can't We Be Friends," sounding as effortless and natural—arguably more so—as the seamless improvisations that earmarked their very first recorded project together forty years ago, Crystal Silence (ECM, 1972).

The symbiosis recurs throughout the ten tracks here, which span standards from pianist Bill Evans' "Time Remembered" to The Beatles' "Eleanor Rigby," where the duo merely hints at the famous tune, preferring, instead, to search out and explore countermelodies for which their respective instruments are particularly suited. The moments when the grand piano and vibes play in unison echo the sublime moments in the original when Paul McCartney's multi-tracked vocals billow through the refrain. At 11:30, "My Ship" is the longest track on the CD, yet it is no more a complete statement than the rest, most of which clock in the six to eight minute range.

It's indicative of the unusually deep friendships musicians can enjoy that Burton and Corea can draw upon their shared history, both directly and indirectly. Two Antonio Carlos Jobim compositions, "Chega de Saudade" and "Once I Loved," were both part of saxophonist Stan Getz's repertoire during the time when these men were members of his group in the 1960s. As the interplay unfolds, the depth of feeling and the nuance that arises are the instrumental counterpart of conversational reminiscence, in which the two compare and contrast their experiences with the formidable saxophonist.

Comparing the level of detail in "Strange Meadowlark" reveals how the relationship between Burton and Corea has grown over the years as they have collaborated, not just with each other, but also in tandem with the likes of bassist/composer Dave Holland. The knowledge and experience they have gained by stretching themselves, individually and together, outside their proverbial comfort zone, is on display here to a great degree, via the sound of the recording itself. The work of longtime recording engineer Bernie Kirsh, whom Corea thanks in his own essay within the CD booklet, the impeccable audio quality captures the fulsome textures of the respective instruments in such a way as to mirror the musicians' thoughts in action.

In a preview of their next recording project, "Mozart Goes Dancing" concludes Hot House and finds Burton and Corea in the presence of the Harlem String Quartet, the spare accompaniment of which mirrors the deceptive simplicity of the pair's playing together. It is altogether preferable to the wash of orchestration that overwhelmed the duo in their last anniversary commemoration five years ago, The New Crystal Silence (Concord, 2008) and whets the appetite for further adventures of a twosome that relishes their mutual inspiration the longer it goes on.