Bob Merrill: Cheerin’ Up the Universe 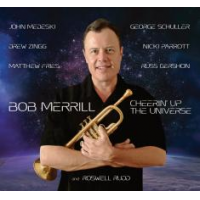 Jazz as an art form is not noted for a particularly sunny disposition. Trumpeter and vocalist Bob Merrill dispenses with this prejudice in his opening original title composition of Cheerin' Up the Universe, his fourth recording. From the outset, this recital is going to be a positive, affirming musical experience sans the saccharine sentimentality projects like this often can fall into. The musicianship and imagination here are much too sharp to allow that to happen.

The New York-based Merrill is the obvious heir apparent to another great trumpeter, Jack Sheldon. His singing is infectious and his trumpet playing is top notch. Completely atmospheric is the razor-precise arranging of the 16 varied pieces collected here. Merrill notes in the liner:

"Most of the songs on this album entered my consciousness during adolescence. Some made me laugh and others made me cry. All filled me with joy ...

And isn't that what music is all about. Merrill's song choice ranges from Pharell Williams' pop confection "Happy" to Pharoah Sanders' transcendent "The Creator Has a Master Plan." That is a lot of musical territory. Merrill assembles an impressive band to translate his feelings about the music to the listener and uses some of the most crackling fresh arrangements to do so. Merrill accomplishes all with a smile on his face (and obviously, in his heart).

Steve Winwood's "Glad" is given a Bossa Nova treatment, featuring a John Medeski organ fill and presented as a musical suite with sharply-defined edges and a virtuosic solos by Merrill and guitarist Drew Zingg over a staccato arrangement. Randy Newman's "Political Science (Let's Drop the Big One)" is delivered organically with a true pop heart, heavy on the Dixieland and features trombonist Roswell Rudd tipping his hat to Kid Ory. A stately take on Joe Zawinul's arrangement of Leonard Bernstein's "Somewhere" and a funky, Burt Bacharach's "I Say a Little Prayer" as arranged by Rashaan Roland Kirk, quote- filled and very fun showcase both Merrill's deep talent and overt sense-of-humor.

Where both attributes manifest perfectly is on the iconic "Compared to What." Covering this Gene McDaniels' classic is fraught with hazard after Les McCann's and Eddie Harris' performance at the 1969 Montreux Jazz Festival and released on their recording Swiss Movement (Atlantic, 1969). Merrill's arrangement retains the McCann's original quote of "The Age of Aquarius" compliments of guitarist Zingg, who mows down all in his path on this performance in this over-the-top arrangement. Merrill updates the lyrics with intelligence and a crafty eye for irony. Cheerin' Up the Universe is a tunefest of the first order.

Cheerin’ Up the Universe; What the World Needs Now; The Secret O’Life; Glad; Political Science (Let’s Drop the Big One); Somewhere; Compared to What; Imagine; I Say a Little Prayer; Feelin’ Groovy; Overjoyed; Happiness; the Creator has a Master Plan; Happy; IGY (What a Wonderful World); I’m So Tired.