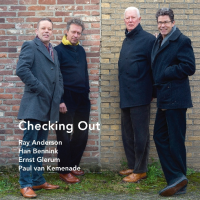 Saxophonist Paul Van Kemenade might just be the least publicly known (at least outside of Europe) jazz musician who has a discography going back to 1979.

His latest effort Checking Out, featuring Han Bennink on drums, bassist Ernst Glerum and trombonist Ray Anderson, will hopefully bring him and his music much more notoriety. The same can be said of his bandmates, besides Bennink, who seems to be the connection bringing everyone together (see ABD which finds Bennink and Anderson together, and Monk with Bennink and Glerum).

The music contained herein could easily be labeled "quirky mainstream" and thus will be accessible to those accustomed to the "straight ahead" as well those with more adventurous ears. Bennink is known mostly for his work on the avant-garde side of jazz, and Anderson is comfortable stylistically from traditional jazz to the avant-garde (with a record with saxophonist Stevie Ray Vaughan(!) appears, in between).

With compositions from Glerum, Anderson and Kemenade, plus Thelonious Monk's "Bright Mississippi," Checking Out ranges far and wide from the late-night blues of "Nothing Is Every" to the frenzy of the middle section of "Ominosity." The recorded sound is on the dry side, which suits Bennink's drumming style perfectly and allows a distinct separation of each instrument.

"Low Profile" is the opening track and sets up the manner and mood for the rest of the record. Opening with just Glerum's dry bass, the tune swings with Bennink's tight, understated vengeance as Kemenade, Anderson and Glerum solo; a definite toe-tapper, the arrangement carries one along for the ride. Next is the title tune, which opens with saxophone lines against trombone growls and other sounds (Anderson's specialty) for about the first half. Binnick takes over alone, and then tune takes off in another nice arrangement.

"Alligatory Merengue" is a lot of fun with a somewhat manic Bennink pushing things along. Glerum's "Left Shoe" features a very pretty tune, played for all its worth by Anderson and Kemenade. Many styles are mixed in "Lost Bones" which finds Kemenade playing an accessible, but quite "out" solo, along with Anderson using a plunger mute. Next is a terrific, grooving track, "Homage for Charles Moffett," a free drummer who had Ornette Coleman as his best man at his wedding. A joyously driving "Bright Mississippi" ends the record on a high note.

This quartet has a definite group personality, the parts adding up to make the whole. Each track, while different its particulars, works within the group's overall sound, arguable anchored in Bennink's unique drumming. Checking Out is, simply put, great jazz which will get you smiling while your body grooves.