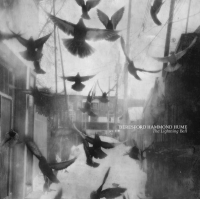 The Lightning Bell is the second release on the label co-founded by Charlie Beresford and Canadian photographer Gaëna Da Sylva, The 52nd. Those familiar with Beresford's previous work will find that this album builds on it and explores new territory. The label's inaugural release, The Science of Snow, featured the duo Beresford Hammond which paired Beresford's acoustic guitar and piano with the classically-trained cellist Sonia Hammond, the two improvising in an engagingly relaxed manner. For this follow-up album, that duo has expanded to the trio Beresford Hammond Hume, with the addition of pianist Carolyn Hume who has an impressive discography of her own, solo and in a duo with drummer Paul May. Hume, May and Beresford are also three-quarters of Fourth Page, an improvising quartet (completed by bassist Peter March) in which Beresford improvises vocals as well as guitar.

The trio's acoustic guitar, cello and piano combine to improvise eight mellow pieces that are simultaneously tight but loose; they are all acoustic—beautifully simple and simply beautiful. The three instruments click together, each adopting a role that sounds natural while perfectly complementing the other two. It is a neat trick which they manage to pull off again and again. As in Fourth Page—but not on The Science of Snow—Beresford also contributes improvised vocal passages to several tracks here; three of the longer tracks are solely instrumental and work well as such, never sounding like they need the addition of vocals.

When Beresford's vocals are present, it feels as if he spontaneously starts singing, as naturally as he would play guitar. On two further tracks there is a surprise, the addition of the English singer-songwriter Judie Tzuke, a friend and neighbour of Hume's who said she wanted to try something different so was invited along to a couple of informal sessions. On the tracks in question, Tzuke sings with Beresford, the two interacting as well as the instruments do, their voices sounding comfortable with each other and the instrumental accompaniment. As the YouTube clip below suggests, it would be no surprise if Tzuke were to make the trio up to a quartet next time out; the results would make interesting listening.

Meanwhile, The Lightning Bell is an exquisite hour of music that will appeal to followers of a broad range of genres from folk to improv. Highly recommended.