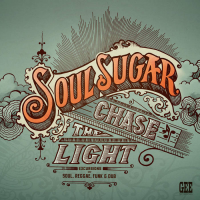 Phenomenal French band, Soul Sugar, comes through with what could surely be the best reggae album of 2017—Chase The Light (Excursions in Soul, Reggae, Funk, and Dub). True to its name, this album is full of funky, soulful reggae tunes, and each one has a delightful dub version as well.

Keyboard player Guillaume "Gee" Méténier, who specializes in vintage keyboards such as Clavinet, Fender Rhodes, and especially the B3 Hammond organ leads Soul Sugar. Méténier is a disciple of Dr. Lonnie Smith (with whom he regularly studies organ) and is influenced by great organ players from Jimmy Smith to Jimmy McGriff to Jack McDuff to Booker T, Art Neville, Bernie Worrell, and Jackie Mittoo. He also runs Gee Recordings, and puts out a slew of delicious 45s there.

I love how Chase The Light (Excursions in Soul, Reggae, Funk, and Dub) easily flows back and forth between reggae, dub, funk and soul. It's totally fresh and modern music, and yet it's foundation is firmly in the superb 70s music that came out of Jamaica. It also pays homage to the deep, instrumental Funk of 1970s America.

"Take A Chance" and "All I Know" feature Courtney John on vocals. He's the best singer from Jamaica these days. He has a rootsy style, and soulful falsetto that's irresistible. Each song on the album has a cool Dub version, and these are two of the best because of how they bring Courtney John's haunting vocals in and out.

"Take A Chance" even features a Hammond organ solo from Dr Lonnie Smith!

"Why Can't We Live Together" with Leonardo Carmichael on vocals is more neo-soul than reggae, and yet it perfectly balances the two. It also has a groovy "Superfly" vibe to it. And, there's an important message of unity in there that reminds me of Marvin Gaye's "What's Goin' On."

The rest of the record is comprised of intriguing instrumentals.

"Get Up & Get It" is a cover version of a Jackie Mittoo classic. It's a groovy Meters-esque style tune with that funky New Orleans shuffle. Dope drums in the pocket kick it off, as organ, and wah-wah join in the fun.

"Big Car" is the other Jackie Mittoo cover tune. It's basically a reggae instrumental version of "Be Thankful for What You Got" by William DeVaughn. Its dub version is mind-blowing too.

"East Of The River Nile" is an exciting 21st century re-work of the Augustus Pablo dub classic. One of the all-time best songs for smoking marijuana, this timeless tune gets an update with deep drumming, and dope guitar flourishes, in addition to the melodica sound and dubbed out keys.

"19 Miles To Kingston" is an intoxicating Guillaume "Gee" Méténier original in the style of Augustus Pablo. It's got plenty of haunting melodica, and mind-blowing organ grooves.

"Mellow Mood" is actually a cover of a Jimmy Smith & Wes Montgomery jazz song. Soul Sugar gives it the reggae soul treatment, and makes it into an astonishing modern song that's part reggae, part funky jazz, and too-cool to categorize. And once again, the far-out dub version just makes the whole vibe twice as cool.

Chase The Light (Excursions in Soul, Reggae, Funk, and Dub) is one of my favorite albums of 2017 because of the way it blends roots reggae with soul music, funk, and jazz. The breathtaking dub songs serve to double the pleasure of each song on the album. Soul Sugar is an immensely talented band that's making provocative, original music from a blueprint of the classic music I love most—and for that I thank them.

Take A Chance; Big Car; East Of The River Nile; 19 Miles To Kingston; Why Can't We Live Together; Mellow Mood; All I Know; Get Up & Get It