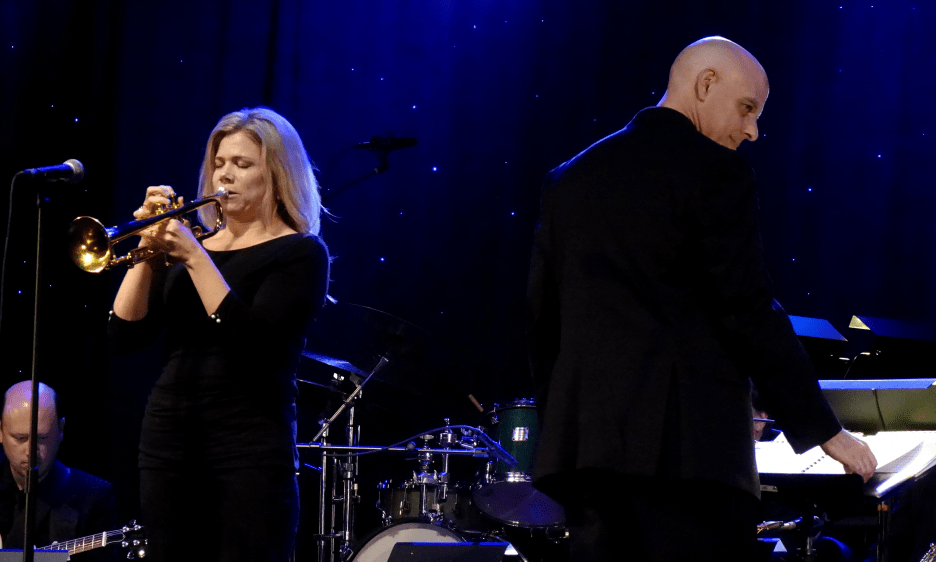 Duke Ellington's performance at the Newport Jazz festival in 1956 was the most important of his long career. After thirty years at the top of his profession, over a thousand tunes composed together with Billy Strayhorn and countless performances, Duke's popularity was at a low point. He kept his orchestra going by using royalty income from previous recordings. Most of the big jazz bands had folded as rock 'n' roll took the limelight. George Wein booked Duke for the third annual Newport Jazz festival which was far from mainstream at that time and the live recording Ellington at Newport (Columbia 1956) became a turning point. That one record put Ellington's orchestra on a pedestal for the remainder of his life and beyond. The initial recording was only about 40% live material because Ellington wanted to improve the quality in the studio the following day. The complete live at Newport 1956 (Sony Music 2005) gave the full picture using digitized original taped material

The Charleston Jazz Orchestra determined to repeat this classic performance live, but the charts were not publicly available, so four musicians listened over and over again to the recording until David Berger, Frank Duvall, Brent Wallarab, and orchestra leader Robert Lewis had transcribed the entire performance. The Orchestra began as Ellington had with the "Star Spangled Banner" which brought the audience immediately to their feet and ended in enthusiastic applause over both performances at the 943-seat Charleston Music Hall. "Black and Tan fantasy," featured horns with a solo from the only lady orchestra member, Cameron Harder Handel and emotive Wah-wah sounds from plunger muted trombones. They went swinging into "Tea for Two" led by Gerald Gregory sitting straight backed in Ellington's spot at the piano and Frank Duvall on bass. In Newport, that ended the first short set, opening the festival.

After collecting up a few lost band members, Ellington played the final set, starting with his signature "Take the 'A' Train." The Charleston Jazz Orchestra recreated the sound along the line of swinging saxophones by using alto, tenor and the beautiful baritone instruments which gave a deep brown buzz to the music. Ellington and Strayhorn composed a suite of three pieces of music especially for Newport. The first, "Festival Junction" began with a clarinet solo from Mark Sterbank. The second, "Blues to be there" started with the rhythm section led by a heavy walking bass groove joined by a line of trombones and the whole range of saxophones to give low and smooth background sound. The third part of the suite, "Newport Up" raised both the tempo and the heat as the title suggested, including a fast guitar solo from Tyler Ross followed by a cascading round including guitar, Sterbank's tenor saxophone and trumpet.

The next tune always evokes memories of Jimmy Blanton bowing a magical solo on the bass accompanied by Ellington but this "Sophisticated Lady" stayed true to the recording and featured the lilting baritone saxophone of Jon Cobb to great applause. Bespectacled and dreadlocked gospel singer Robbie Madison joined the orchestra to sing "Day in, Day Out" in a light but true voice giving a pleasingly smooth delivery. The big hit from the recording came next in "Diminuendo and Crescendo in Blue," a juxtaposition of falling diminuendo and rising crescendo intensity linked together by a jostling, striving, tightly interwoven battle between alto and tenor saxophones of Sterbank and Lewis to replace the storied Paul Gonsalves tenor saxophone solo. Ellington hammered chords yelling "Dig in Paul" to keep the solo going through 27 choruses punctuated by guitar and drums. The crowd went wild as the solo ended and the full big band wound up slowly, inexorably to the thrilling wall of sound crescendo and a blaring finish.

Ellington calmed his crowd with two alto saxophone pieces, "I got it bad (and that ain't good)" from the musical Jump for Joy which was played by bandleader Lewis and "Jeep's Blues" played in Charleston by Jon Phillips who was feeling the music and let go with long expressive blues phrases to enthusiastic applause. In Newport, the crowd refused to let Ellington stop and in Charleston Robbie Madison rejoined the band to sing "Tulip or Turnip" (Moonbeam or mud pie / What am I to you?) supported by a plunger muted trombone solo set against a sung scat section.

Despite resistance, Ellington announced he would end the performance with "Skin Deep" which Ron Wiltrout performed in Charleston beating out a long and complicated series of drum solos linked by the orchestra.

Robert Lewis came to the microphone, thanked everyone and said goodnight with Ellington's signature farewell "We do love you madly." Magic happens rarely except in fairy-tales, but this dedicated 18-piece Orchestra came close. There will never be the original magic in the air again, but there was some fizzing energy and electricity from the authentic Charleston Jazz Orchestra.