By FRIEDRICH KUNZMANN
February 20, 2020
Sign in to view read count
No, the title of this review doesn't refer to the autobiographical story of similar name, which tells of a young Roald Dahl looking for adventure in Africa. But like the protagonist of that book, the two individuals discussed in the following prove similarly adventurous in their own right and dig deep into the vast repertoire of their respective instruments to tell their own original tales—in a musical way. 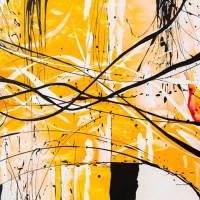 An established player in the Finnish scene, bassist Ville Herrala is known for his work with ensembles such as PLOP or the U-Street All Stars, to name a couple. On Pu:, his debut solo outing, he tests the dynamic limits of his instrument in a sequence of tracks carrying the consecutively numbered titles "Pu," one through fourteen. Each track exhibits unique and different qualities within a logical narrative arc.

The sequencing of the tracks alternates between the strings of the bass being plucked and bowed. Consequently, the plucked odd-numbered performances demonstrate sharper rhythmic attack and bouncier melodic language, while the even-numbered experiments tend to focus on the timbre and sound in the frames of a variety of glissando techniques. This rule applies to all tracks up to "Pu: 9," at which point the order is inversed by two consecutive plucked songs. Both approaches however incorporate a strong emphasis on the percussive qualities of the double bass as well as on the overall compositional structures.

"Pu: 1" opens the album with a slick riff rushing over the strings, demonstrating the vast range of frequencies the instrument has to offer straight from the start. Other plucked takes focus on the damper qualities of the bass: In contrast to the opener, "Pu: 3" and "Pu: 7"consist of very few impulses and let the warmth of the instruments' lower pitch resound, while on "Pu: 5" and "Pu: 9" Herrala's fingers are extended by a tool of some sort, which further accentuates the initial impact on the strings. This leads to a distinct percussive effect of fluttering scrapes in the higher frequency spectrum.

An equal variety in technique, tone and pace can be traced in the bowed tunes. The overtone spectrum plays an important role in the hurriedly bowed notes on "Pu: 2," while samples of the squealing and squeaking strings of "Pu: 4" could be used for simulating squeaking doors or whimpering dogs in movies. This is in no way a negative observation, but a comment on the precision and detail this recording has to offer. The sonic aspects are remarkable. "Pu: 5" and "Pu: 8"'s menacing build ups and shivering pulses are reminiscent of Johnny Greenwood's work on the soundtracks for "There Will Be Blood" or "The Master" while "Pu: 13"'s carefully constructed cadences recall exercises found in classical compositions for double bass. Pu works both as a platform for experimentation and as a complete artistic statement. 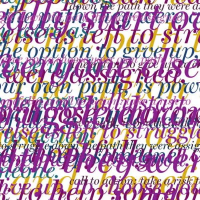 Chicago-born saxophonist Jonah Parzen-Johnson has been based in Brooklyn for a while now, close to where he completed a Bachelor of music in jazz studies at New York University and a Master of Music in jazz saxophone at Manhattan School of Music. Ever since getting better acquainted with the synthesizer however, the modulating machine has become a fixed companion to his saxophone playing. Besides contributing to the Afrobeat outfit Zongo Junction, as of recently Parzen mainly focuses on his solo output, combining synth-waves with electronic beats and minimal saxophone lines. In that spirit, Imagine Giving Up follows closely in the footsteps of last year's live album Helsinki 8.12.18 (We Jazz Records 2019), a limited cassette and digital only release. With "Find The Feeling" and "Everything is Everything Else," two songs off of that album even make it back on to Imagine Giving Up, now revised and presented as a polished studio recording. The compositional approach is minimal. Small impulses on the saxophone find reacting phrases in synthesizer bass lines before more electronic patterns and percussive elements lay out the foundation for saxophone soloing.

"Focus Re-Focus" sounds like an exercise in chillwave that would do well setting the mood in dark, neon-lighted bars or accompanying a Nicolas Winding Refn movie. Thickly layered saxophone overdubs breathe endlessly to a drone-like effect, creating the harmonically and melodically minimal background that sees Parzen solo to a mesmerizing climax.

If "Everything is Everything Else" feels like an attempt at a post-modern exercise in cyber-electronic folk music, then "Stand Still" would have to be described as a techno-based pop song (or even just the chorus of a song) that clashes with a lonely saxophonist who isn't quite ready to give up on the acoustic nature of his main instrument.

Throughout the album, plenty of new elements are introduced at frequent intervals, keeping the music moving and structurally transforming. Rather than creating typical never ending and never alternating loops, Parzen actively and constantly reshapes electronic impulses and synth lines to follow new musical ideas. The fact that his self-assembled synthesizer is built to automatically follow the volume of the saxophone as well as him being able to control the synth with his feet only enhance the diversity and agility of his solo performances on imagine giving Up. A unique offering with a futuristic approach.

Tracks: Finding the Feeling; Focus Re-Focus; Everything is Everything Else; Up; The Smile When You Fall; Stand Still.