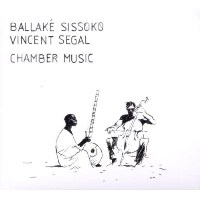 Until quite recently, the kora was a curiosity which generally required the bracketed explanation (a 16 or 21 string West African harp) when referred to in print. Today, with "world music" part of the cultural mainstream, the instrument is almost commonplace. More so, in jazz anyway, than the cello (a four string viol pitched above a double bass), which—despite a lengthy pedigree going back to Fred Katz's work in drummer Chico Hamilton's chamber group of the 1950s—remains on further shores.

Any exotic frisson, then, in the intimate and quietly groovalicious Chamber Music, from Malian kora player Ballake Sissoko and French cellist Vincent Segal, comes at least as much from Segal's presence as it does from Sissoko's. Neither jazz, nor traditional Malian music, nor European chamber music, but all of those things rolled up together, the album is a brilliantly realized exercise in part-composed, part-improvised genre exchange. It's all the better, too, for being one that the musicians explored together for several years in Paris, before travelling to singer Salif Keita's Studio Moffou in Bamako, Mali in 2009 to record this album.

As its title suggests, Chamber Music is, in the main, softly spoken and understated, yet it's engrossing for all that. Despite being led by two string instruments, textures and sonorities are constantly changing, and the music inhabits a more eventful harmonic base than is used in traditional Malian kora music. The plucked kora and, for the most part, bowed cello produce complementary rather than uniform sounds, and the sound palette is extended on half the tracks by a handful of other instruments: ngoni, balafon and, still with the brackets perhaps, bolon (a bass ngoni) and karignan (a metal percussion instrument). Mostly, these instruments play supporting roles, but Fassery Diabate adds a lovely balafon solo to "Houdesti." Vocalist Awa Sanagho is heard on one track, "Regret," a tribute to Kader Barry, who sang on Sissoko's 2005 album, Tomora (Label Bleu).

Sissoko and Segal kick out the jams, relatively speaking, on the upbeat "Ma-Ma FC," but the prevailing ambiance is of late night, neighbor friendly jamming under the stars. Highly recommended.