Known around the world as "The Golden Voice of Mali," Salif Keita's unique sound blends the traditional styles of his West African homeland with influences from Cuba, Spain, Portugal, and the Middle East. The instrumentation that accompanies his singing represents a fusion of European and African popular music, ranging from guitar, organ, and sax to traditional African instruments such as the kora, balafon, and djembe, often synthesized and sampled. He has enjoyed a prosperous career not only in his native Mali, where he was awarded the National Order of Guinea, but also in Europe and America, where he became well-known after moving to Paris and collaborating with other African musicians based there.

In 1968, in the Malian capital of Bamako, a 19-year-old albino boy scrapped the conventions of his noble ancestry to become a professional singer. Poor despite his social standing, rebellious, and vexed by poor eyesight, the boy chose music over the only alternative he saw, a life of crime. Salif Keita sang with the legendary, Latin-tinged Rail Band of Bamako in the early '70s before starting his own more fusion-oriented group, Les Ambassadeurs which also featured brilliant Guinean guitarist Kante Manfila.

Keita moved to Paris in 1984, and there he recorded “Soro,” a dazzlingly beautiful realization of his brooding, modern take on Malian tradition. “Soro” set a new standard for electric Afropop, and it legitimized African music in the progressive rock mold-music for listening, not just dancing. Keita sings with belting, no-holds-barred passion that evokes blues shouters and R&B screamers. But his sound hews close to the style of the Islamic Manding griots, who sing to evoke the grand struggles and tragedies of history.

After many struggles, Keita has learned to tap into the pain of life and to transcend it in cathartic song. With a Grammy nomination for his 1992 “Amen,” a collaboration with Weather Report's Joe Zawinul, Keita ranks among the most celebrated African singers. Keita's 1999 release, “Papa,” was co-produced by Vernon Reid and moved more aggressively in the direction of rock music than any of the singer's previous works. “Papa” met with initial skepticism both at home and abroad, but the release has become extremely popular in Mali, and it earned Keita a second Grammy Award nomination in 2000.

Keita followed up with “Moffou,” in 2002. This record was considered some of Keita's finest work to date, and he received a Grammy nomination for the album. Keita then returned to Bamako, Mali, in order to record his next full-length effort, “M'Bemba,” (The Ancestor) which came out in 2006.

Keita’s 2010 release of “La Difference" is a much anticipated production where he continues the trilogy concept he started back in 2002 with "Moffou," and "M’Bemba."

The dual forces of tradition and modernity, of his heritage and his journeys throughout the world continue to add to his musical vocabulary. At present, he is at the peak of his career, having finally reconciled his responsibilities and heritage in Mali with the demands of international recording and touring. He has transformed the language of the acoustic sounds and rhythms of his homeland into a stimulating fusion for the most sophisticated ears. His vocals remain as clear and powerful as ever. Keita sounds like a man possessed by the spirits of his ancestors and ready to settle into this next phase of his life. Show less

Leni Stern to Open for Salif Keita 6/24 in NYC 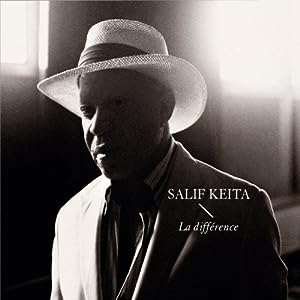 All About Jazz musician pages are maintained by musicians, publicists and trusted members like you. Interested? Tell us why you would like to improve the Salif Keita musician page.