It was almost inevitable that Baaba Maal would one day call an album The Traveller because for the Senegalese veteran travel and music are inextricable. The singer and guitarist belongs to the semi-nomadic Fulani people. He first left his homeland of Fouta, in the river valley region of northern Senegal, almost 40 years ago, to perform music hundreds of miles away as a teenage boy scout and he has been a wanderer ever since. “It’s part of my culture,” he says. “The songs travel from village to village, from country to country. It’s something natural to my tribe and this part of Africa.”

The Traveller, which features the British poet Lemn Sissay and members of The Very Best and Mumford and Sons, is both a new direction and a powerful summary of his life’s work: a rich and moving celebration of seeing new places, meeting new people and making new music together. “When you travel you learn things that would have taken you years to learn in one place,” Baaba says. “You learn about the different corners of life.”

Born into a large family of fishermen in the Fouta town of Podor in 1953, Baaba studied music in Dakar, the capital of Senegal, and Paris, and embarked on a two-year musical pilgrimage around west Africa with his friend Mansour Seck. He then recorded albums with Seck, including the desert blues classic Djam Leelii, and the band Daande Lenol (The Voice of the People). Since the 1980s, he has released several solo albums, toured the world many times, worked with Hans Zimmer on the soundtrack to Black Hawk Down, and collaborated with the likes of Brian Eno, Peter Gabriel, Tony Allen and U2. Despite his international perspective, he has always acknowledged his roots by singing in Pulaar, the Fulani dialect of the Senegal River valley. Baaba’s work is a modern twist on the West African tradition of the griot: the storytelling troubadour.

Fittingly, The Traveller originated on a train. Baaba met Johan Hugo of The Very Best on a train tour of the UK with Africa Express, the musical melting pot that Baaba had co-founded with Damon Albarn several years earlier. Since his last album, 2009’s Television, Baaba had been thinking about making a more electronic record and Johan Hugo was the perfect collaborator. Baaba promptly appeared on The Very Best’s 2012 album MTMTMK.

The following year, The Very Best Sound System joined the line-up of Gentlemen of the Road, Mumford and Sons’ touring festival, and Johan Hugo asked Baaba to perform with the sound system at one stop. Baaba repaid the favour by inviting Johan, as well as Winston Marshall and Ted Dwayne of Mumford and Sons, to appear at Blues du Fleuve (Blues of the River), his own annual festival in Fouta, in December 2013. He established the festival in 2005 to draw attention to his home turf. “Even the people who live in Dakar sometimes don’t know the country very well,” says Baaba. “It’s to open a window for people to discover where I come from and see all the opportunities in this part of Senegal.”

As soon as the festival was over, Baaba and his guests began writing songs in his home studio in Podor with African musicians including Kalifa Baldi, a talented youngster from a family of guitarists. More songs were recorded at Baaba’s studio in Dakar and the album was completed in London, largely produced by Johan Hugo.

The Traveller evokes the pleasures of journeying and the satisfactions of homecoming. “No matter how long I might be away, wherever I am, and whatever I am doing,” Baaba explains, “I will always return to Fouta to feed my soul.” It opens with Fulani Rock, a high-energy, djembe-driven tribute to his homeland, and Gilli Men, a stately mantra featuring the Dakar Church Choir. One Day and Kalaajo combine quicksilver guitar work with spacious electronic production. From the Podor sessions with Marshall and Dwayne, Lampenda is a surging, uplifting homage to his fisherman heritage and Traveller is the album’s explosively joyful centrepiece.

The last two tracks, Peace and War, feature celebrated Lancashire writer Lemn Sissay, who was the official poet of the London Olympics. Baaba met Lemn in London at the Africa Utopia festival which Baaba co-produces every year with the Southbank Centre in London. The two men had long conversations about the state of the world which led to Sissay’s powerful spoken-word performances: the tense, percussive War and the meditative Peace, enriched with kora and peul flute. These two songs were produced by John Leckie (Radiohead, Muse, Stone Roses), who has produced several of Baaba’s previous albums.

The Traveller’s themes of communication, reconciliation and responsibility chime with Baaba’s work as an activist who has campaigned for women’s rights, HIV/AIDS awareness, debt relief, climate issues and education. He is a Youth Emissary for the United Nations Development Program and a global ambassador for Oxfam. For Baaba Maal, music and activism are interwined because they are both about building bridges and encouraging mutual understanding. The Traveller pulls all the strands of his life together in one glittering tapestry.

“Most of the problems we have are because people don’t travel enough and discover other people and enjoy their company,” says Baaba. “By travelling you discover that humanity is so beautiful: different faces, different cultures, different colours, different sounds. To live in one place is very boring. When you travel you realise that humanity and the planet is a very big gift, in spite of some of the man-made horrors. This is what I want to celebrate.” Show less 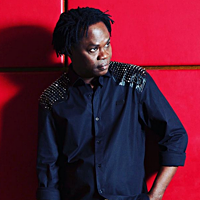 All About Jazz musician pages are maintained by musicians, publicists and trusted members like you. Interested? Tell us why you would like to improve the Baaba Maal musician page.