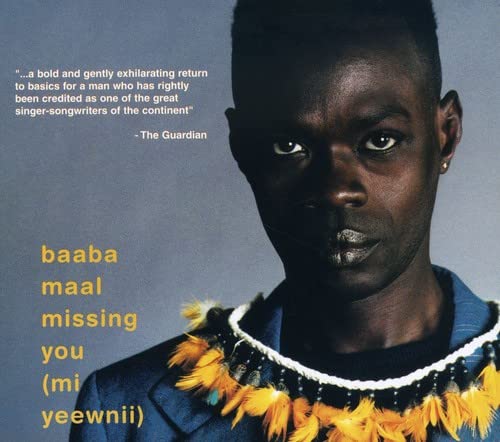 Senegalese singer Baaba Maal has a voice that projects such intensity that it almost doesn't matter what musical setting he chooses, but smaller groups and acoustic instruments do him the most justice. The amazing thing about Missing you (Mi Yeewnii), recorded in the Afro-pop musician's literal backyard, is that it really does sound like a performance at home. It opens with Maal singing characteristically brightly amidst faint cries from children playing in the background (and a rooster crowing a minute later), building over time to include multiple guitars, kora, and rich vocal harmonies. Somehow, despite the abundance of musicians on the roster, everyone really does fit in the space of that backyard.

Baaba Maal is now about fifty years old, having defied his familial fisherman caste to make music a long time ago. Along the way he received help and brotherhood from blind griot guitarist Monseur Seck, who's an inseparable part of the group. Indeed, if Maal is the spark, Seck is the ground. And of the over 15 percussionists credited in the liner notes, six are Seck family members. That's part of the roots-oriented nature of Baaba Maal's music. It's an amalgam for sure, but it respects deep origins from the singer/guitarist's home in Fulani Northern Senegal, as well as a nearly unidentifiable collection of other traditions.

The core of this music is three-fold: voice, strings, and drums. The human voice is often harmonized but always propelled by Maal's emphatic delivery. The strings include six guitars, a kora (a type of large harp attached to a gourd resonator), and three hoddus (a small lute-like string instrument) in various places. The drums, nearly required for this music, are most obviously dominated by the tama (otherwise known as the talking drum) and sabar (employed to support the sharp mbalax rhythms frequently championed by Senegalese pop hero Youssou N'Dour).

From the gentle, resonant guitar harmonies of "Jamma Jenngii" (a lyrical love song) to the traditional lullaby "Miyaabele" (retooled to stress African unity), Maal keeps it organic and gentle in tone. But the group picks up the pace on the groovy "Fa Laay Fanaan," the sharper "Mamadi," and the Cubanized title track. Producer John Leckie (Radiohead, The Stone Roses) does a wonderful job of organizing these tracks along the theme of bringing the music home.

Fortunately the liner notes include translations of the lyrics, which emphasize social and political consciousness. The CD also includes two videos with kids dancing and narration explaining how the record was put together (essential). Says Maal, "I wanted something really natural." And with short, appealing tracks that only once stretch beyond five minutes in length, nothing out-stays its welcome.

This CD review is being published in support of Baaba Maal's current American tour, whose recent Boston show was reviewed here . Missing You is a desert island pick for me, yielding more and more emotion upon repeated spins. But it's best to be careful: too much of such a strong spice and you'll want to go without for a while.

Baaba Maal plus over 40 musicians, griot and otherwise.