Celebrating Bird: The Triumph of Charlie Parker by Gary Giddins 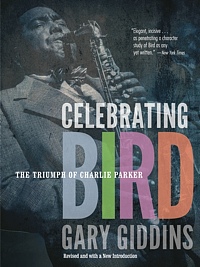 Having read Gary Giddins' revised edition of Celebrating Bird: The Triumph of Charlie Parker I am even more committed to my position in my recent review of Stanley Crouch's Kansas City Lightning: The Rise and Times of Charlie Parker:


"Crouch casts a well-worn story, many times told, within the frame of an exhaustively-researched social history of Black America surrounding World War II."

Every one of the half dozen Parker biographies tells the same stories using the same sources, necessarily using the very same quotes. Where Ross Russell's Bird Lives—The High Life and Hard Times of Charlie "Yardbird" Parker (Quartet Books, 1973) and Robert Reisner's Bird: The Legend of Charlie Parker (Da Capo, 1975) both resulted from the respective author's first hand experiences with Parker, both having conducted business with him during his short life, they thusly provide a good deal of the "first-hand" material for subsequent biographies. Both are frequently cited sources in all subsequent biographies, including Crouch's and Giddins' revised edition.

What Crouch brought to the table with Kansas City Lightning was a well-researched history of a number of elements contributing to the Parker story. Crouch addresses the geographical and cultural history of the Kansas City area during the World War II and postwar periods as well as a brief history of the territory bands of the 1920s and '30s before fleshing out the backgrounds of the more prominent regional bands like those of Benny Moten, "Hot Lips" Page, and Jay McShann. Crouch focuses those characteristics unique to Mid- and Southwestern-jazz compared to that made in New Orleans, Chicago, and New York City.

Crouch also gave additional time specifically to Parker's relationship with his parents and first wife, Rebecca Ruffins, adding considerably to the early Parker lore established by Russell and Reisner. Crouch's introduction and build-up to the Parker story is slow and methodical, filling out the three dimensions that is Charlie Parker. What Giddins offers with Celebrating Bird is a finely crafted overview emphasizing those elements of Parker's life where the saxophonist fundamentally changed contemporary music.

Giddins' book has held up very well since its 1987 first edition (Beech Tree Books). The author "revises" his work by only providing an updated preface and discography (retaining the original discography for comparison). His text remain as it was, taut and trim with none of the inherent romance found in Russell's or Reisner's books. Absent is the grueling detail of Parker's dissolution in Los Angeles that led to six months in California's Camarillo State Mental Hospital or Parker's psychotic break surrounding the death of his daughter Pree leading to two hospitalizations in New York City's Bellevue Hospital. Giddins mentions these in passing and only for context with Parker's erratic timeline.

Where Crouch builds context about Parker by fleshing out the histories of Kansas City, territory bands, and Jim Crow in its various shades, all of which he does in excellent and necessary fashion, adding valuable information to Parker Lore, Giddins erects a frame of reference of Parker's place in higher art at large, viewing Parker and his talent and influence as a definition and a standard of comparison. Midway through Celebrating Bird Giddins expands the context of Parker to the "popular" art versus the "serious" art level, while at the same time placing the issue of race in harsh perspective:

"An elemental difference between popular and serious art is that the former gives society what it wants and the latter gives it what it must. The impact modern jazz had on American life is reflected not least in the number of people, including countless artists in other fields, who found themselves relearning their responses to music because of it. Indeed, bebop's glittery blare reawakened many to the astonishing fact that much of what was best in American culture emerged from a formerly enslaved and often despised minority. Which is not to say that its proponents achieved a mastery or seriousness lacking in their predecessors. The music of Armstrong, Ellington, Bessie Smith, Hawkins, Young, Holiday, Basie, Tatum, Eldridge, and many others of the 1920s and 1930s, was every bit as expert, personal, and willful. The choices they made were in all important respects were singularly musical, even in the arena of commercial concessions. They represented the first wave of accomplishment, when jazz and popular music reinforced each other. The modernists knew that the marriage was no longer tenable. Jazz in the Swing Era was so frequently compromised by chuckleheaded bandleaders, most of them white, who diluted, sentimentalized, and undermined the work of dedicated musicians, that a bold new virtuosity was essential—and the modernists brandished it like a weapon. They confronted social and musical complacency in a spirit of dauntless romanticism. Their art was a relentless celebration of self."

What passes for popular music today could use a little bit of this grease that Parker possessed in abundance. Giddins' Parker tome remains required reading for its precise distillation of facts and music of a largely improvised life.