By JOHN EYLES
May 17, 2018
Sign in to view read count
On April 5th 2018, the world lost pianist, composer, poet and iconoclast Cecil Taylor, at age 89. Taylor was the last surviving member of a generation of players who gave birth to the music variously labelled as avant-garde, fire music or free jazz, although some sources jointly credit Taylor and Ornette Coleman as its originators.

A native New Yorker, Taylor received piano lessons by the age of five, taught by his mother. A childhood classical-piano prodigy, he studied composition and harmony at New York City College of Music before spending four years earning a degree at New England Conservatory of Music.

Throughout his long career, the pianist's playing displayed that formal training and classical roots, even if he never ventured to perform compositions beyond his own or the jazz repertoire. When playing solo and freely improvising, his speed of hand and mind matched one another and he never for a moment seemed at a loss what to play next. Even when playing music that no other jazz pianist would dare to attempt, Taylor made it look easy and natural, an enviable talent.

At a conservative estimate, Taylor's recorded legacy numbers well over eighty albums. The standard of music on those albums rarely fell below very good, and criticisms or complaints about particular recordings tend to focus on the recording or sound quality rather than the music or playing. Consequently—as with other prolific musicians—selecting a dozen or more of Taylor's "best" albums to typify his music is not an easy task. To ease the situation, the list below avoids Taylor albums that have been referenced in other Building a Jazz Library articles, namely Conquistador (Blue Note, 1966), Leaf Palm Hand, The Hearth and Pleistozaen Mit Wasser (all three FMP, 1989).

Three categories of album account for a sizeable chunk of Taylor's discography—group recordings including saxophonist Jimmy Lyons (covering the years 1961 to 1986), Taylor solo piano recordings (1968 to 2000), and FMP recordings (1988 to 1999)—and any decent Taylor collection should include several of each category, and also, to add context, some from his early years and a few from his later years. Happy listening!

Recorded in Boston in September 1956, when Taylor was 27, his debut disc found him in the company of Steve Lacy on soprano saxophone, bassist Buell Neidlinger and Dennis Charles on drums. Of the six tracks on the original album, three were credited to the pianist, the other three being by two of his favourite pianists—Monk's "Bemsha Swing" and Ellington's "Azure"—plus Cole Porter's "You'd Be So Nice To Come Home To." The reading of the Ellington piece is lively but quite reverential, whereas other tracks contain hints of the revolutionary approach to jazz that would soon make Taylor much talked about.

Between Jazz Advance and the recording in June '58 of Looking Ahead, the quartet that recorded the debut made two vital live appearances; from November '56 to January '57, they were the first official engagement at the newly-opened Five Spot Café in New York's Bowery district, a gig that attracted much publicity and critical comment but, sadly, was not recorded; in July '57 they appeared at the Newport Jazz festival, where they were recorded, the results appearing on the compilation album Live at Newport (Verve, 1958). Given all that, it is puzzling why the line-up for Looking Ahead! replaced Lacy with Earl Griffith on vibes. Whatever the reason, the change worked. Despite the identical instrumentation, the music is light years away from the Modern Jazz Quartet. Crucially, Taylor the composer is more in evidence here, with all six tracks being his compositions, and the pianist sounds more exploratory than before without denying his roots; the title of "Wallering" speaks for itself, and the masterful "Excursion on a Wobbly Rail" owes a debt to the Duke's "Take the 'A' Train."

"You cannot claim that the energies of the past have no relationship to whatever you're engaged in now." Cecil Taylor to Nat Hentoff, Downbeat, February '65.

Recorded in October '60, by the trio of Taylor, Charles and Neidlinger (plus new addition tenor saxophonist Archie Shepp, on two tracks) this album was produced by the critic Nat Hentoff (who had also supervised Looking Ahead!). The Candid sessions also produced four other albums not released until the '70s and '80s, Air, New York City R&B, Jumpin' Punkins and Cell Walk for Celeste. All of the recordings were eventually issued as the four-disc set The Complete Nat Hentoff Sessions. Part of this album's fascination is hearing how Shepp played Taylor's music; evidently, he was not always sure how to deal with it. The version of the track "Air" here was take number twenty-eight, and other takes of that and other tracks showed up in the four albums listed above. Although a critical success, this quartet was disbanded for financial reasons as gigs were hard to come by. Although Taylor was revolutionising jazz, he wasn't taking the jazz public with him. Yet.

On November 23rd 1962, a concert by the trio of Taylor on piano, Jimmy Lyons on alto saxophone and Sunny Murray on drums was recorded at the Café Montmartre in Copenhagen, Denmark. When first released in 1965, on Debut, the music was credited to Cecil Taylor Jazz Unit—a name that would frequently be used for Taylor ensembles. The Copenhagen recordings have been re-issued many times since, sometimes with questionable sound quality. This Revenant album contains all the music from that evening, in the best sound quality of all. The music is some of the finest from Taylor's early years, with extraordinary interplay between the three trio members.

The album is significant for featuring Lyons who had joined Taylor in 1961, and first appeared with Taylor on the album Into the Hot (Impulse!, 1961) credited to the Gil Evans Orchestra. While Lacy and Shepp might sound like hard acts to follow, Lyon's vocal sound and sense of melody proved ideally suited to Taylor's music. He was to remain the saxophonist for Taylor, an ever-present mainstay of his groups for years to come. 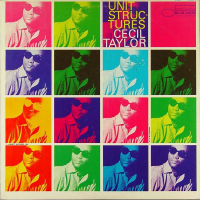 After a rather fallow patch, Taylor joining Blue Note was seen as an indication that his fortunes were improving. Recorded in May '66, five months before Conquistador and featuring the septet of Taylor, Lyons, trumpeter Eddie Gale Stevens Jr, Ken McIntyre on alto sax, oboe and bass clarinet, Henry Grimes and Alan Silva both on bass, and Andrew Cyrille on drums, Unit Structures is notable for its seventeen-minute title track, "Unit Structure/As of a Now/Section" which makes good use of the expanded palette provided by the septet. Some commentators have groused about the sound or recording quality of the album, but it is impossible to find fault with the music; heard fifty years after it was recorded, it sounds surprisingly contemporary. Interestingly, after 1966 Taylor did not record for Blue Note again. 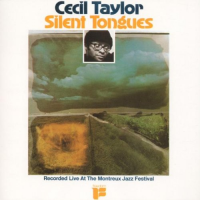 Taylor's earliest solo recording was made in Italy in 1968, but was not released until 1982, in Greece, as the poorly-pressed, crackly, double LP Praxis. From then on, Taylor solo concerts and recordings were interspersed with those of his groups (or units). Rather better than Praxis were two Arista Freedom live solo releases, Indent, recorded at Antioch College, Ohio, in March '73, and this album from Montreux '74, which benefits from also having been captured on film, showing Taylor at his mercurial best. Watch those fingers dance! 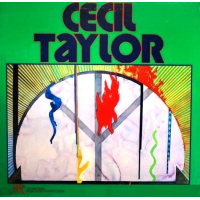 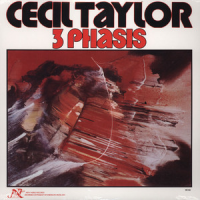 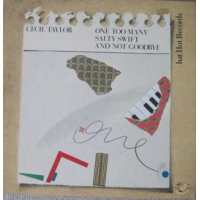 Cecil Taylor
One Too Many Salty Swift And Not Goodbye
(hat Art, 1980)

These three albums were all recorded in 1978 by a new version of Taylor's Unit, consisting of Taylor and Lyons plus trumpeter Raphé Malik, violinist Ramsey Ameen, bassist Sirone and drummer Ronald Shannon Jackson. The two New World Records discs were studio recorded, the hat Art one was recorded in concert. The energy of the music here is frequently of volcanic proportions, making it compulsive listening. This is a good place for Taylor sceptics to begin investigating.

As well as this release, hat Art released other notable Taylor recordings such as It Is In The Brewing Luminous and the superb solo record Garden 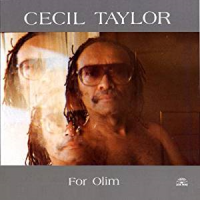 Yet another excellent solo outing from Taylor, recorded in Berlin, in April 1986, the month before Jimmy Lyons died of lung cancer, aged 54. On release, For Olim carried this line about the saxophonist who was so important to Taylor for a quarter of a century:
"This record is dedicated to the living Spirit of Jimmy Lyons." 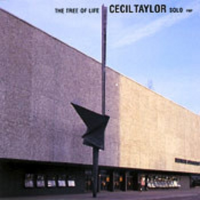 In June and July 1988, Taylor played a series of concerts at a festival in Berlin organised to celebrate his music. Concerts with such European luminaries as Derek Bailey, Tony Oxley, Han Bennink and Tristan Honsinger emphasised the links between Taylor's music and European free improvisation. The event came to be regarded as a watershed in the pianist's career. A lavishly-documented eleven-disc limited-edition box set of recordings of concerts was instantly hailed as an indispensable masterpiece; although that box set is long out of print (and still changes hands for silly amounts of money!) the individual discs are still available and should all be considered essential.

Just as importantly, in the wake of the festival, Taylor continued to record for FMP, with recordings released on the label right through until 2012.

FMP effectively defined the latter years of his recording career, to the extent that any Taylor record on the label can be unreservedly recommended.

Recorded in 1991, Tree of Life was one of several solo recordings he made for the label. Compared to some of his more tumultuous solo outpourings, the music feels restrained and reflective, at times being decidedly pastoral. 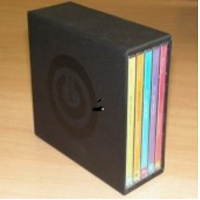 The Feel Trio emerged in the wake of the 1988 Berlin festival and consisted of Taylor plus William Parker on bass and Tony Oxley on drums. Although the group—inevitably—has excellent releases on FMP, such as Looking (Berlin Version) (1990) and Celebrated Blazons (1994), the ten-disc box set 2 T's for a Lovely T, recorded live during a 1990 five-night residency at Ronnie Scott's, London, benefits from its sheer scale and the group interactions it captured. When all three are playing flat-out at the same time, the results are simply breath-taking. Thankfully, although the original box-set long ago sold out, the music was reissued digitally in 2016 and is still available disc by disc. 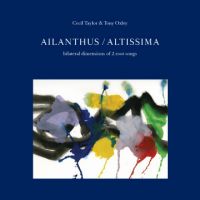 Recorded at the Village Vanguard in NYC, in November 2008, the music on this (now very expensive...) double LP represents Taylor's last recording... and he ended on a high in a duo with Tony Oxley, his drummer of choice many times since 1988.

The clip below—showing one of Taylor's last public performances---seems a most fitting place to end; it features him playing at the 2015 memorial service for Ornette Coleman.
We shall not see their like again.