By Mark Corroto
November 19, 2019
Sign in to view read count 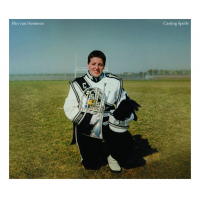 If you live in the US you might have seen a television commercial for a mortgage company that utilizes Bob Dylan's composition "The Man In Me." Did the advertising firm choose this song because music gives us a sense of a shared experience? Certainly. Was the experience from the original Dylan recording New Morning (Columbia, 1977), or more likely, the shared occurrence come from the the soundtrack to the cult film The Big Lebowski. Does this use make mortgages cool? Not really, but the context does.

What does this have to do with Casting Spells & The Coves by New York City-based Dutch drummer, pianist and composer Flin van Hemmen? Everything and nothing. Unlike "The Man In Me" as agitprop, van Hemmen eschews context in this music as the common denominator. The sounds are more dreamlike than reality, meaning a roomful of listeners will each hear something different. Van Hemmen plus guitarist Todd Neufeld (Tyshawn Sorey, Jon Irabagon) and bassist Eivind Opsvik (Overseas, Nate Wooley, Opsvik & Jennings), who recorded Drums Of Days (Neither/Nor Records, 2016) reconvened to record these two suites of live material which then became fabric for van Hemmen to blend with his post-production processing. Where Drums Of Days utilized minimal tinkering, Casting Spells & The Coves merges field recordings, processing, a poem, and overlaid tracks with the live sounds. Van Hemmen's reworking of the minimalist live recording creates a soundtrack to an imaginary movie that plays in your head throughout. Subtle voices enter, as does traffic, weather, babies, some swinging passages, birds, a museum tour, field recordings of other music, and church bells. All the sounds decay, even the live recorded passages, as if all were heard when you were just falling asleep. Better yet, just as you've awakened. Perhaps the title here should have been YEMD (Your Experience May Differ), because it certainly will.