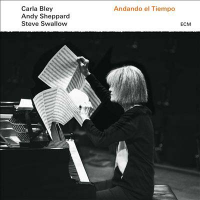 A few months shy of three years following the release of Trios (ECM, 2013), composer/keyboardist and NEA Jazz Master Carla Bley returns with Andando el Tiempo, an album of largely introspective music that shares much with its predecessor, but also acts as a flip side of the same coin.

Like Trios, Andando el Tiempo was recorded in Lugano, Italy (albeit in two different rooms) and brings back the same trio that first appeared on 1994's Songs With Legs (Watt/ECM) but reconvened in 2013 to record Trios: Bley, on piano, alongside life partner/electric bassist Steve Swallow and saxophonist Andy Sheppard. And, with Andando el Tiempo, Bley once again hands the role of producer over to ECM's Manfred Eicher—surprisingly, given her longstanding relationship with the label that distributed all recordings on her Watt and XTRAWatt labels beginning in the early 1970s, Trios was the first time that the composer/pianist was produced by the ECM label head. As with Trios, Eicher's input as an active producer—who gets his hands dirty rather than simply overseeing the proceedings—plays a significant role in the success of Andando el Tiempo.

Where Andando el Tiempo differs significantly is the repertoire. While Bley sifted through her existing back catalog for Trios—playing music that dated as far back as before her own career as a leader actually began ("Vashkar," first appearing on pianist Paul Bley's 1963 Footloose!, on the Savoy imprint, but also made famous on drummer Tony Williams' 1969 Lifetime debut on Polydor, Emergency!), through to more recent fare like "Les trois lagons," first heard on 4x4 (Watt/ECM, 2000)—Andando el Tiempo is comprised of all-new material. That Bley—who turns 80 ten days after Andando el Tiempo's release on May 6, 2016—is still capable of writing not just good music, but great music is a remarkable achievement in itself; but, equally important, her playing—in some ways encouraged Eicher to assume a more central (or, at the very least, equal) role than she often has in the past on Trios and now Andando el Tiempo—also remains distinctive...and demonstrative that sheer virtuosity is not necessarily a prerequisite for greatness.

Bley, in fact, demonstrates that attention to space, detail and nuance—not to mention a harmonic sophistication developed over decades of writing for diverse instrumental contexts ranging in size from duet to extra-large big band—are other ways to assert instrumental excellence; with the last two recordings Bley has proven that, not unlike singer/songwriter Leonard Cohen, there may be more technically proficient players than she—more dextrous, more overtly virtuosic—but when it comes to playing her music, nobody is better-suited to sit at the piano bench than she.

Comparing Trios and Andando el Tiempo to Songs with Legs not only reveals three musicians who have undeniably grown over the past two decades; in addition to drawing out the core qualities that make every member of this trio significant and special, Eicher's own ear for detail renders both Trios and Andando el Tiempo as more sonically open, with greater clarity across the layers produced by these three players...and the room in which they recorded, live, without any baffling or separation.

The three-part, 28-minute, title track (which translates from Spanish as "with the passing of time") was inspired, as she recounts in her brief liner notes, by Bley's experience watching a friend recover from addiction to pain and anxiety medication. "Sin Fin" ("Endless," reflecting the realization that dependence on these medications had become insufferable) opens the album on a dark note, Bley's gentle tango rhythm supporting an oblique but nevertheless memorable melody played by Sheppard on tenor before Swallow enters, his upper-register work as inimitable as ever, delivering a sparsely constructed solo. Bley follows, empathically supported by Swallow as she builds, motivic-based in ascension, to a gentle climax before dissolving and passing the baton to Sheppard, whose solo is similarly built on deceptively simple constructs, creating melodic passages like passing a thread through the eye of a needle.

"Potación De Guaya," intended to reflect the sorrow of those affected, is also founded on a soft tango rhythm but, if anything, the tone is more somber still. As is the case with the suite's first part, time is defined but somehow slightly elastic...the consequence of three players who have worked together for so long, and in so many contexts (Swallow has been Bley's bassist of choice since 1979's Musique Mechanique, while Sheppard has often recorded with the pianist since 1988's Fleur Carnivore), that they can be completely flexible, with the absolute knowledge and trust that wherever one player goes, the others are sure to follow...or, alternatively, respond with something that pushes the trio in another direction entirely. With Sheppard on soprano this time, this near-ten-minute piece again provides plenty of solo space for everyone, but the overall feeling is less that of soloist and accompanists and more three-way conversation.

"Camino Al Volver" closes the suite on a more buoyant note, albeit constructed around an angular, ascending line that the group plays, in part, in unison, but other times alone individually—sometimes playing just one or two notes while the others carry the rhythm that ultimately underpins the piece. It's a complex mathematical construction that nevertheless unfolds to another Latin-informed solo section that, reflecting a return to health and sustainability, takes Bley's initial thematic construct and, as the piece progresses, turns it into a connecting thread, alternatively ascending and descending...and, as the suite draws to a close, turns more complex still, as the three players orbit around each other, sometimes intertwining but ultimately resolving in unison, with an uncharacteristically definitive conclusion.

"Saints Alive"—inspired, as Bley recounts, by "an expression used by old ladies sitting on the porch in the cool of the evening when they exchanged especially juicy gossip"—is nevertheless another introspective piece based on a set of changes that hint at normalcy but, with Bley's quirky playing providing the foundation, is a lengthy feature for Swallow, who rides above the pianist for more than five of its eight-plus minutes, until Sheppard enters on tenor and blurs the line between form and freedom on a piece that manages to be both idiosyncratic and the album's most outright lyrical composition.

The closing "Naked Bridges/Dividing Brides"—both a commission for the London Jazz Festival's 21st birthday and a wedding present for the newly married Sheppard—continues to reflect Bley's distinctively idiosyncratic approach to writing, and looks both to classical composer Felix Mendelssohn and librettist Paul Haines, with whom she collaborated on the epic Escalator Over the Hill (Watt/ECM, 1971) and ambitious follow-up, Tropic Appetites (Watt/ECM, 1974), for inspiration. From knottily eccentricity to more rhythmically majestic, this ten-minute closer comes the closest to actually swinging...albeit only briefly, as it moves from "Naked Bridges" to "Dividing Brides," where the trio waxes optimistic, even as the context remains as challenging as anything Bley has written.

Over the decades, in fact, Bley's inherent idiosyncrasies have become increasingly detailed in the way she adapts them to compositional form. And yet, for all the difficulties no doubt presented to those asked to play her music, her work remains somehow compelling and easy to digest. This is particularly true in smaller contexts, and it's unlikely that Bley—an artist who, rather than slowing down, seems to be ramping up as she approaches octogenarian status—has ever had such empathic and intimate opportunities as in this trio with Swallow and Sheppard...and, in particular, now that she is working directly with Eicher.

With road work and more ECM recordings planned, it's no surprise, perhaps, that when Bley's busy schedule was mentioned to Swallow, in Ottawa in 2009 as part of the Gary Burton Quartet Revisited tour, he joked, "I've been trying to get Carla to slow down...pick up gardening or macramé or something. But she just keeps writing." With albums like Trios and, now, Andando el Tiempo, that cannot be anything but a very, very good thing.