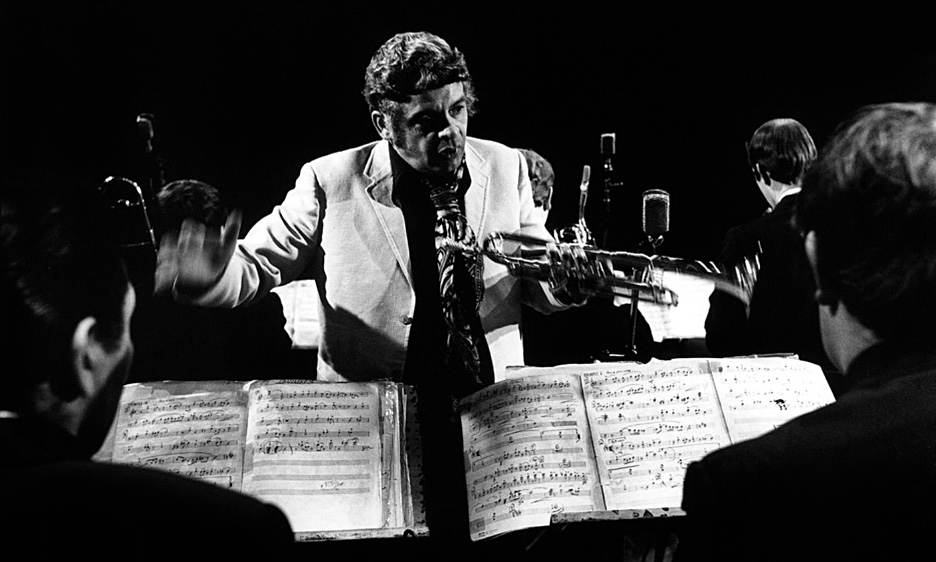 BY NICK CATALANO
August 20, 2019
Sign in to view read count
The recent Montreal Jazz Festival (read about it here) sparked many conversations hailing the evolution of the event in recent years and its growing importance for musicians everywhere. It certainly ranks among the best jazz convocations in the Western Hemisphere. The occasion of the festival offered me an opportunity to reflect on the history of Canadian jazz and my association with some of its leading exponents. The first name I thought of was Maynard Ferguson.

My multiple associations with jazz include: performer since childhood, a writer during past decades, and a producer showcasing many of the greatest names of the past half-century. During my associations with the music one of my principle frustrations has been the failure of many to recognize jazz as a major art form on a par with the best musics anywhere. As a corollary of this epic failure many great jazz artists have received less than their due as superlative artists. One of the curses in this failure occurs when a jazzer enjoys "popularity." Ironically, being well-known among the masses often causes history to miss unique aesthetic achievements and especial artistic merits. Such is the case with Maynard.

Beginning in the seventies I produced shows starring Benny Goodman, Lionel Hampton, Harry James, Woody Herman, Stan Kenton, Dave Brubeck, Dizzy Gillespie, Buddy Rich, Duke Ellington, Count Basie and a host of legendary jazz vocalists i.e. Sarah Vaughan, Chris Conner, Anita O'Day got to know them well and, in my capacity as a reviewer, got to interview them and write about them. Many of them became lifelong friends.

The concerts with Maynard were especially memorable. His dedication to the music was unwavering. One time I had to stuff him and his wife Flo into a makeshift green room—an unkempt basement locker room; during my frustrating apologies the Fergusons kept reassuring me and telling me to relax. On other occasions there were similar venue problems and Maynard's attitude was always supportive.

During the early seventies Maynard's popularity soared. His albums Live at Jimmy's, M.F. Horn 4&5 and Chameleon recorded in '73 and '74—sold widely and even non-jazz audiences were drawn to the excitement of the music and Maynard's unique showmanship—always ingenuous and emotionally communicative. And his incredulous, soaring high notes always engendered riotous applause as clubs and concert halls were packed everywhere. In 1976 the Ferguson band released Conquistador an album featuring the single "Gonna Fly Now"—the theme from the academy award winning film Rocky. That single reached the top of the Pop charts and Ferguson's popularity soared ever higher. I was lucky enough to produce several dates during this heady time.

Popularity always seems to dim the enthusiasm of critics. As the Ferguson band gained fans all over the planet due in part to Maynard's indefatigable work schedule, the critical response waned. Few writers focused on the seriousness of his musicianship and the astounding versatility of his trumpeting; because of his high C notoriety few critics noticed his intensive staccato articulation in up tempo bebop literature. And his Mozartian child prodigy origin was totally ignored.

Born in the Verdun area of Montreal in 1928, young Ferguson, son of parents who were both musicians, started playing violin and piano at age four. When he was nine he asked his parents to buy him a cornet after hearing the instrument for the first time. Incredibly, at age thirteen he was soloing with the Canadian Broadcasting Corporation Orchestra. Instantly he became a radio star playing "Serenade for Trumpet in Jazz" by Morris Davis—a legendary Canadian composer and won a scholarship to Conservatoire de Musique du Quebec a Montreal where he studied from 1943-48 mastering the gamut in composing, arranging and performing. Very few "popular" jazz figures can present such classical credentials.

Because of his incomparable high note artistry, Maynard was sought after by every big band leader imaginable. Upon finishing his conservatory training he moved to the United States and in rapid succession starred in the bands of Boyd Raeburn, Jimmy Dorsey, and Charlie Barnet whose recording of Jerome Kern's "All the Things You Are" featured Maynard's screaming high Z trumpeting. Leading trumpeters in these bands Doc Severinsen, Rob McConnell, Rolf Ericson) simply sat back in disbelief as Maynard awed his peers. (His soaring range so infuriated Kern's widow that the record was withdrawn from sales). Soon he was soloing in Stan Kenton's band and those recordings with his high-note imprimatur secured his reputation over the entire jazz world.

In 1956 Maynard married Flo. They eventually had six children and, ever mindful of burgeoning family responsibilities, Maynard had accepted employment with Paramount Pictures. He performed in 46 film soundtracks including The Ten Commandments and was able to provide comfortably for his growing family. After securing a future for Flo and the kiddies, Ferguson needed to escape the shackles of commercial music and returned to jazz joining the Birdland Dream Band which eventually evolved into his own orchestra. In 1959 he signaled his fealty to his classical roots performing William Russo's Symphony in C with Leonard Bernstein and the New York Philharmonic Orchestra.

In the following years Ferguson led various versions of his own orchestras achieving the aforementioned "popular" heights. But during these years and successes he was ever mindful of the serious, complex, and subtle hallmarks of artistic music. And as I iterated earlier, even though commentators ignored so much of this, he maintained his focus. He was particularly insightful when hiring musicians who shared his artistic vision. He scoured the best music schools (Berkeley, Eastman, Miami) for the best talent and collected great performers from foreign countries on his world tours (Danny Ross, Peter King from England and Bruce Johnstone from New Zealand).

Ferguson's prodigious intellect sought recompense outside of music. He continually moved his family around the world studying the vagaries of British culture while living in England. Later the family moved to Millbrook New York where he and Flo hobnobbed with professors from Harvard and experimented with psychedelic drugs alongside Timothy Leary and Ram Dass. In 1967, he moved everyone to India where taught music and absorbed important Asian ethical and aesthetic traditions and incorporated Indian instruments and influences into his music.

A consummate musical polymath, Maynard played french horn, valve trombone, and baritone horn and designed the "superbone" and "firebird" the latter adopted by Indian musicians who utilized it in complex Asian notation systems. In his later years he received myriad honors and awards from institutions and governments and an honorary doctorate from Rowan University.

A definitive Ferguson biography has yet to written but when an attempt is made the Renaissance life of this extraordinary musician will have to include detailed analysis of his vast aesthetic and intellectual activity. If researched carefully the popularity of his life's achievements will be eclipsed by an elevated artistic one and ,perhaps, at that time the breadth of his talent may be completely revealed.