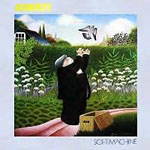 If the recent discovery of NDR Jazz Workshop (Cuneiform, 2010) demonstrated that the once considered "transitional" 1973 line-up of British psychedelia-cum-electric-avant- jazzers Soft Machine was, indeed, a fine enough standalone unit, then Esoteric's near- concurrent reissue of 1975's Bundles proves that the addition of guitarist Allan Holdsworth lit one serious fire beneath that same group. Back in print and a tremendous improvement over the previous See for Miles CD, it's a chance to revisit an album that fired an important shot across the bow of the largely American- dominated fusion movement.

Holdsworth had already begun to garner some acclaim—his solo on "Hector's House," from trumpeter Ian Carr's overlooked Belladonna (BGO, 1972) was a raw but stunning early example of what was to come—but Bundles truly put this legend-in-the-making on the map. If he'd contributed nothing else but his mind-bending solo on the powerful opener, "Hazard Profile Part One," that would have been enough, turning increasingly influential keyboardist/reedman Karl Jenkins' riff-driven head and vamp solo into one of the most visceral six minutes of mid-'70s fusion this side of Mahavishnu Orchestra's The Inner Mounting Flame (Columbia, 1971). Holdsworth's high velocity and utterly unique cascading, legato lines—informed by saxophonist giant John Coltrane's legendary "sheets of sound"—push the group towards visceral, rock-edged heights they'd never previously achieved, but especially drummer John Marshall, who matches the guitarist's frightening runs note-for-lithe-note.

This may have been a more conventional fusion group, compared to the freer excursions and more oblique compositions of Third (Sony, 1970)—the early masterpiece that would became a constant and unfair litmus test for everything that followed—but it was also the perfect vehicle for Jenkins' more accessible writing—generally either irregular-metered riffs ("Hazard Profile Part Five"), classical-leaning lyricism ("Hazard Profile Part Two") or hypnotic minimalism with interlocking keyboards and serpentine melodies ("The Floating World"). But the title track may be his best ever; a memorable, change-heavy head leading to Holdsworth's unfolding solo, which—like his playing throughout—breathes more than some of his later work, with gritty bends creating captivating tension and release.

Holdsworth isn't the only one to solo impressively. Bundles might be founding keyboardist Mike Ratledge's swan song as a group member (he only guests briefly on the 1976 follow-up, Softs, coming soon from Esoteric), but his synth solo over "Hazard Profile Part Five"'s fiery 7/4 vamp is as impressive as anything he's done. There's no sign of his fuzz-boxed Lowrey organ, but his shifting chords beneath the pedal tone of Holdsworth's solo on "Part One" make this a more definitive performance than the version documented on BBC Radio 1971- 1974 (Hux, 2003), recorded a month before Bundles' July, 1974 sessions.

With the group's reinvention—one that began with Six (Sony, 1973)—now complete, Holdsworth's rapid departure a month after Bundles' release prevented the true potential of this Softs line-up from ever being fully realized. Thankfully Soft Machine's "other" masterpiece is back in print as a reminder, with Esoteric's usual fine attention to richer, more three-dimensional sound revitalizing its status as an instant fusion classic.