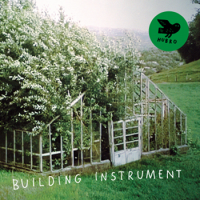 The Norwegian trio Building Instrument has taken its time to record its debut album. The Bergen-based trio—featuring vocalist and multi-instrumentalist Mari Kvien Brunvoll, known for her duo with guitarist Stein Urheim, who previously produced two acclaimed albums, Daydream Community and Daydream Twin (both on Jazzland, 2011 and 2013) and her self-titled solo album (also on Jazzland, 2012). These recordings inspired a surprising remix of the song "Everywhere You Go" by DJ Ricardo Villalobos; underrated percussionist Øyvind Hegg-Lunde, member of the Swedish-Norwegian free-improv trio The Big Almost, and The Sweetest Thrill duo with guitarist Stephan Meidell, and keyboard player Åsmund Weltzien who plays in local vocalist Thea Næss' band.

The three began to work together in 2008 with the idea of exploring electronic music. This idea was quickly abandoned in favour of more acoustic and home-grown sounds, with subtle electronic touches, or as the trio describes it as a "no- man's-land music." Since its inception, all of the trio's songs are largely improvised, but Brunvoll writes the lyrics. She sings for the first time on record in Norwegian, stressing her lush accent of Molde, using her voice also as a suggestive instrument. The trio's songs highlight a playful innocence that is reflected in the joyful manner of inventing catchy rhythms, emotionally charged melodies, and new sounds that blur the distinction between acoustic and electronic sounds. The three musicians demonstrate impressive command of both the freely improvised, loose segments as well as the elegant, reserved lyrical parts.

The songs sound almost as alternative pop songs with a structure that returns again and again to an infectious, melodic theme as the wordless "Historia," but all add a twist of experimental, unsettling sounds. The songs are constructed as a continuation of each other, and "Alt e Bra" sounds as an organic outgrowth of "Historia," but now intensifying the former songs dreamy, spacey atmosphere. This enigmatic dream-state vein is kept on the serene "Kanskje," a lyrical song that borrows elements from Brazilian samba, French chanson, and Norwegian traditional folk music and still sounds coherent, rich with its simple sounds and temps with its delicate sensitivity. "Klokka Sju" marks the forsaking of the soft, dreamy delivery for a more dramatic one, still one that is playful one, with a catchy chorus that wraps the unique voice of Brunvoll with vintage keyboard flights and a hypnotic pulse. The instrumental "Språk" even intensifies this rhythmic approach with an organic mix of rock-solid pulse spiced with West-African rhythms.