BY JAKOB BAEKGAARD
April 22, 2014
Sign in to view read count 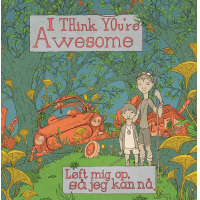 For a long time, the jazz scene in Denmark has been centred around Copenhagen and the city is still the jazz capital of the country with its many jazz venues and labels like ILK and Stunt, but there is also a fertile jazz environment in the city of Aarhus where exciting things are happening and new talents emerge.

One of them is bassist Jens Mikkel, who has actually moved to Sweden recently, but he still has ties to the city and the talented musicians on the local jazz scene and many of them appear on his album Løft mig op, så jeg kan nå.

The name of Jens Mikkel's project is I Think You're Awesome and the name conveys the childlike wonder of his music. Listening to the album is like moving through a complex and dreamlike fairytale-landscape where new grooves, melodies and textures emerge. Bubbling Wurlitzer, mournful cello, delicate webs of guitar reverb and lyrical trumpet tones are all part of the mix, but while the bassist's compositions certainly have the quality of almost cinematic soundscapes, they are also carried by the immediate quality of a sweet melody. A case in point is the opener, the humorously titled "Be Kind To Your Neurosis," where a folky banjo melody intertwine with a bouncing bass groove, celestial soundscapes and a web of electric guitar patterns.

Jens Mikkel is also an important part of the lyrical Kasper Staub Trio and pianist Staub's spacy Wurlitzer piano graces ballads like "Girls With Radical Haircuts" and "Jeg Vil Ik' Hjem." Another important ingredient in the music is the guitar-playing of Morten Kærup and Alex Jönsson. Jönsson is a noteable voice on the scene and has released the album The Lost Moose.

Like the participating musicians on the album, Jens Mikkel belongs to a generation of musicians that dissolve the boundary between jazz, post-rock and pop. His organic experiments are related to the Danish indie-group Efterklang, but he has his own voice as a composer. However, the album isn't the work of an individual. It is a strong effort from a collective of talented musicians and the album underlines the arrival of a new vitality in Danish jazz.

Be Kind To Your Neurosis; Girls With Radical Haircuts; Jeg Vil Ik' Hjem; I Think You're Awesome; MorgenFunk; Schwartzwald.

About I Think You’re Awesome