BY JOEL KLAUBER
November 9, 2012
Sign in to view read count 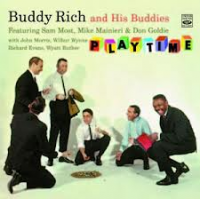 More than 25 years after his death, the controversy about master drummer Buddy Rich rages on. Was he nothing more than an incredible drum technician of little sensitivity or flexibility? Or was he, as many history books contend, truly "the world's greatest drummer"?

While it is ultimately up to the listener to decide, the record, literally and figuratively, speaks for itself. Though known as the fiery driver of big bands, the truth is that Rich played exquisitely, for decades, in small group combinations. These combinations included the likes of the Art Tatum/Lionel Hampton/Buddy Rich Trio, the Lester Young/Nat Cole/Buddy Rich Trio and The Oscar Peterson, to say nothing of his work as a sideman in the Louis Armstrong/Ella Fitzgerald project and on legendary ballad dates such as those saxophonist Charlie Parker made with strings.

The above were not the "slam-bang" Buddy Rich fabled in song and story. Nor are the rare and especially distinctive tracks from 1960 and 1961 just released by Fresh Sound Records. Playtime features the drummer at the helm of a "very unlike Buddy Rich" small ensemble with a sensitive front line of Sam Most's flute and Mike Mainieri's vibraphone.

At times intense and at times sensitive, Rich's backing inspires Most and Maineri, especially on the up tempo numbers, to tremendous, swinging heights. "Cheek to Cheek," "Fascinatin' Rhythm" and "Will You Still Be Mine" are great examples. And make no mistake about it, Buddy Rich loved ballads and those who could play them well. A very young Mainieri, he was just 22 when these sides were made, stands out on two versions of "Misty," while the ensemble shines on a beautiful "Angel Eyes." among others.

Drum aficionados should note that there are no extended solos herein. But there are a series of astounding breaks and a couple of full choruses here and there that fit into the context of the chart. Most of the charts, by the way, were penned by Mainieri, who uses the full range of every instrument at his disposal. A great rhythm team of pianist Johnny Morris, guitarist Wilbur Wynne, bassists Wyatt Ruther and Richard Evans, and Vinny Marino on congas for some numbers, are all swinging and powerful accompanists who all sound as if they're on the same, swinging page with the leader.

They wouldn't be there otherwise.

Trumpeter Don Goldie, who was probably in town with Jack Teagarden's group of the time, sits in on two cooking numbers, "Playtime" and "Marbles." Rich must have liked the addition of a trumpet, however informal it was on this go-round, as he later added one permanently to this band in the form of Rolf Ericson.

These sessions have an interesting history. "Playtime" was originally an Argo LP recorded in October of 1960 in Argo's Ter-Mar Chicago studios. In January of the following year, an entire album's worth of material, including Mainieri charts and several tasty originals, was recorded at the same place. It was, however, never issued, and no reason was ever given. Given Buddy Rich's sometimes tempestuous relationships with record company honchos, what happened with Argo is not surprising. It happened earlier with Verve, and it happened later with RCA.

It must be noted that both of these sessions were issued some seasons ago as a part of a Mosaic boxed set, though the item has been out of print for some time.

Included in the Fresh Sound issue is a newly-discovered, never-issued set, also recorded in October of 1961. "Let's Go To Town" was one of those public service radio broadcasts done on behalf of the National Guard. Many artists, including Rich's friend and rival, Gene Krupa, did these shows, and in fact, Rich shares billing on this one with the Les Paul/Mary Ford duo.

All the numbers are in the compact, three-minute range for radio broadcast. A few tunes, specifically "After You've Gone" and "Little Girl Blue," were never recorded by the group. All are tasty, refreshing and swinging.

This particular band did a grueling US State Department tour, and in the summer of 1961, with the addition of trumpeter Ericson, recorded something called "Blues Caravan" for the Verve label. To these ears, the sides on this Fresh Sound issue capture the true essence of this one-of-a-kind group. A trumpet was unnecessary.

That was about the end for this unique ensemble, as Rich returned to the Harry James fold in 1962. Four years later, Buddy Rich formed his own big band, which he led, with brief interruption, until his death in 1987.

This Fresh Sound release shows another extraordinary side of the great drummer's talents. There's no new ground broken here, as Buddy Rich often said he wasn't interested in making history or in being a part of it. His credo? Alto saxophonist Phil Woods, who was about to join BR's small group in 1959, asked his new boss if there was anything special he needed to know about the gig. "Yeah," Buddy replied. "Wear a clean shirt, be on time, and swing your ass off."

Playtime does just that.

Tracks: Lulu's Back in Town; Playtime; Will You Still Be Mine?; Fascinatin' Rhythm; Makin' Whoopee; Marbles; Misty; Cheek to Cheek; The Night is Young and You're So Beautiful; Little Susie; R.B.; Angel Eyes; The Be-Bop Irishman; Foxy; The Surrey With the Fringe on Top; The Way You Look Tonight; Doxy; Mountain Greenery; Cheek to Cheek; Lulu's Back in Town; Baubles, Bangles and Beads; Mountain Greenery; Misty; Sweet Georgia Brown; Little Girl Blue; After You've Gone.

Tracks: Lulu's Baack in Town; Playtime; Will You Still Be Mine?; Fascinatin' Rhythm; Makin' Whoopee; Marbles; Misty; Cheek to Cheek; The Night is Young and You're So Beautiful; Little Susie; R.B.; Angel Eyes; The Be-Bop Irishman; Foxy; The Surrey With the Fringe on Top; The Way You Look Tonight; Doxy; Mountain Greenery; Cheek to Cheek; Lulu's Back in Town; Baubles, Bangles and Beads; Mountain Greenery; Misty; Sweet Georgia Brown; Little Girl Blue; After You've Gone.