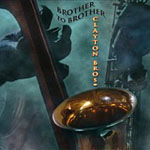 Jazz had a family thing going long before the Marsalises showed up; Jeff and John Clayton created Brother to Brother to showcase the sibling side of that equation. Wynton and Branford's music isn't touched on, but other related members of jazz royalty receive due deference either through loving covers or new compositions inspired by honorees. To complete the project's family atmosphere, John's son Gerald Clayton holds down the piano chair, with outstanding results.

The Jones boys (Thad, Hank and Elvin) bookend Brother thanks to two terrific Jeff compositions: "Wild Man" captures the fiery essence of Elvin, while "The Jones Brothers" touches on the artistic goodness all three brothers brought to the game—Hank on his own, Elvin with Coltrane, and Thad through the ensemble now known as the Vanguard Jazz Orchestra. Terell Stafford was one of (seemingly) thousands on the VJO's smoking Monday Night Live at the Village Vanguard (PlanetArts, 2008), but he steps out of the crowd on Brother, completing a weapons-grade front line that sports enough power to peel the chrome off a trailer hitch.

After clearing the decks on "Wild Man," Jeff and Terrell literally get down to business on the greasy long-form blues "Still More Work," which was inspired by Nat Adderley's classic "Work Song." This begins what could be called The Adderley Suite as the quintet goes on to tackle Nat's hypnotic "Jive Samba" and Jeff's original "Big Daddy Adderleys"; the love the Claytons have for the Adderley brothers radiates from these pieces. Jeff and Stafford may as well be brothers given the seeming telepathy that surrounds the solo exchanges and skin-tight harmonies. As for Gerald, the only time he gets even remotely sentimental is when he complements John's heartbreaking bowing on "Where is Love"—arguably the most saccharine song in Broadway history. The rest of the time, the young lion takes his cues from the front line, serving up percussive stick-and-move piano lines that definitely leave a mark or three.

While Brother to Brother is a musical triumph, it doesn't fully deliver on its premise. There's no question of the Adderleys and the Joneses' impact on the genre, and the Claytons can be excused for giving extended love to Nat Adderley, who John credits as a musical and personal influence. But the other "historical" connections are, at best, a stretch: "Bass Face" was written by Kenny Burrell, whose brother was a bassist; Monty Alexander covered "Where is Love," and Monty worked for years with vocalist brother Larry. With all respect, comparing these duos' body-of-work with that of the Heaths or the Breckers (both mentioned in John's liner notes, but unrepresented in the set) is like saying Jason & Jeremy Giambi's combined statistics qualify both players for induction into Cooperstown.

Nonetheless, the overall quality of Brother to Brother is undeniable. Every piece is undiluted trad jazz, delivered with no apologies and no quarter. So while some worthy musicians may have been missed here, the Claytons' passion for this subject shines so brightly.