Maximize your visibility at All About Jazz by upgrading your musician page from standard to premium. With it, you'll receive All About Jazz home page exposure, a highly stylized / ad-free musician page with bonus features and benefits, an ad, plus you control where you sell your music and so much more.
Learn More
430 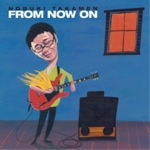 Breaking into the jazz scene as a guitarist is a tough move, with the icons of old standing reverently on high shelves, and the next big thing always out there somewhere awaiting discovery. While debut albums can impress and amaze, it's the follow-ups which cause genuine excitement. From Now On, the second release by Japanese guitarist Nobuki Takamen certainly does that.

While Takamen has prodigious technique at his disposal to spare, From Now On never forces it in your face as some albums in general, and guitarists in particular, are prone to do now and then. His lines—as well coated in bop flavor as they are—never seem aimless or without purpose, and his playing is consciously paced, with a sense of urgent energy at times; lean, yet full of ideas ready to flow onwards. While ordinarily that might be enough for a successful recording and career, Takamen is equally adept and skillful on slower, more contemplative compositions, not to mention the defining guitar altar known as the blues.

Although the closest denominator is a love of singer-songwriter James Taylor's music, comparisons could easily be drawn between Takamen's playing and that of the iconic Pat Metheny. His compositions all have strong, lyrical melodies akin to Taylor's, which sink into the mind, inviting subconscious lyric-writing from even the most casual listen. "Scenes" has a somewhat James-esque Metheny quality to it, while the deep, acoustic lullaby "Nebergall Loop" brings memories of Metheny's Travels (ECM, 1983) and not just via the spacey, is-it-delay-or-just-a-touch-of-chorus tone. That said, Takamen isn't a Metheny-clone by any possible definition, rather someone who has taken from the same influence and arrived at a similarly beautiful conclusion.

The rest of the ensemble altogether shines, both on the faster, more jazz-oriented material, and the slower pop-infused tunes. Whether it is Beninghove's driving tenor solo on "C.M.G" or Kanda's flowing and satisfying piano work on "Smile," Takamen is never found lacking support or left carrying a song by himself. On a related thread, the communication and interaction between guitar and piano is exemplary, each contributing to the accompaniment in ways which play to both instrument's and player's strengths. While Kanda takes responsibility for the majority of comping, the short moments of chordal playing on the guitar sits perfectly with overall harmonic and aural footprint of the group. Bassist Tanahashi and drummer Kikuchi provide the perfect blend of motion and subtlety throughout; driving when invited, and complimenting when called upon to do so.

Burning lines, thoughtful tunes, provoking technique and a band that isn't overshadowed by any of the above could easily sum up a good, one-off recording, but in this case, From Now On provides an exciting continuation of a promising career.

C.M.G; Scenes; One Big Shot; Smile; Like Blue; 3 x 4; Message for the Messengers; Nebergall Loop; Nine; From Now On.