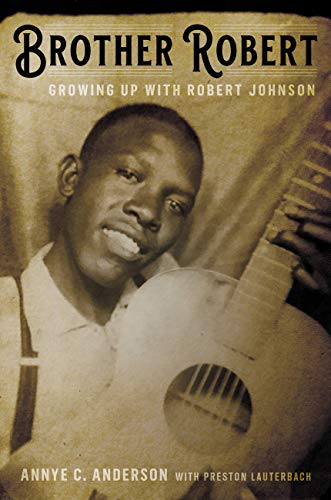 Brother Robert: Growing Up with Robert Johnson is a slim memoir told by Annye C. Anderson, step-sister of Robert Johnson, to author Preston Lauderbach (The Chitlin' Circuit And The Road To Rock 'N' Roll (Norton, 2012)). While this gentle, but powerful, account will not be the final word in Johnson reportage, it will, finally, drive a stake into the vampiric heart of the Johnson Myth of graveyards, crossroads, and the anthropomorphic realization of iniquity within all of us. This narrative provides the third and fourth traditional dimensions missing from the story of Robert Johnson and provides the added (and, perhaps, more important) story of Anderson herself, an enduring and shining character and historian in her own right.

Until publication of Up Jumped the Devil: The Real Life of Robert Johnson Robert Johnson existed in the single dimension of his 42 recorded shellac sides, comprised of 29 original songs of which 13 were recorded twice, as was the method of the time. As author Elijah Wald (Escaping The Delta: Robert Johnson And The Invention Of The Blues (Amistad, 2004)) points out in this introduction the the book:

"For more than 80 years, the only way to experience Robert Johnson has been through those recordings. For millions of people all around the world, he is those recordings. We have listened to them over and over, spent hours, days and years with them. So it is easy to feel we have spent time with Johnson,, and to forget that he only spent a few days making them and what we hear is barely an hour and a half of his life."

That fact, and the next 75 years of myth making brought us the Conforth and Wardlow's book, which begins to responsibly flesh out the story of Robert Johnson giving him his second dimension, one defined within a period of time, adding detail that refutes much of the previous inferior reportage. There is a beginning, middle, and end to this story, one rendered with little, if any, romantic fluff. The quality of the account is all it can be: "It is all we got" and there was a time when much more was promised by erstwhile historians and researchers, with at least good intentions in the beginning, that were ultimately eroded with the promise of ownership and future money.

What stepsister Anderson provides is a sliver of history through a child's eyes, experienced, written, read and illuminated in the time it takes lightning to flash. In these brief recollections lay a warm, rich and potent story of a sprawling black family existing in the most corrosive of the Jim Crow South. The story extends from south Mississippi (Hazelhurst) to Memphis, where Johnson found home with stepfather Robert Spencer. Anderson's memories of Johnson are of a handsome, young man with great talent and compassion. She tells us how Johnson treated her and how he was treated by the family. She speaks of Johnson's ritual of laying out his guitar playing paraphernalia and what his favorite hair pomade was. Great detail is devoted to the family that surrounded Johnson, providing the necessary third dimension, generating a complete hologram of the man. Johnson is humanized beyond petty myth. This is the gift Anderson has given us.

Perhaps the most powerful part of the book is devoted to the afterlife of Johnson and his "estate." It is, to date, the finest explanation of the story surrounding the story: of cultural historian Mack McCormick and cultural opportunist Steve LeVere and their two-decade legal fight over an estate that belonged to neither. Anderson details how both took advantage of the Johnson family, stealing family photographs and, ultimately the rights to the music while the family got nothing, a story in no way unique to them: white entrepreneurs create a commercially viable music genre, seek out and exploit the largely disenfranchised artists who made the music. The blues revival of the late 1950s is littered with these stories.

Often viewed as a victim of the unscrupulous LaVere, McCormick is revealed as not much better. Both boasted mountains of information and both promised biographies. But money got in the way. Where McCormick may be considered well meaning (...and "the road to Hell paved") and obsessive, LaVere can only be considered a purveyor of cultural genocide comparable to what Albert Goldman's attempted in his treatment of Elvis Presley in his biography of the singer, Elvis (McGraw Hill, 1984). Anderson has much to say about them.

But Anderson does not reserve her assignment of responsibility to only McCormick and LaVere. She meads it out to Johnson contemporaries Johnny Shines, David "Honeyboy" Edwards, Robert Jr. Lockwood, and Johnson's alleged son Claud Johnson (no genetic tests were performed) as men who sold often spurious information to an eager and careless press. Anderson expresses all of these thoughts and feelings with the quiet and reserved anger of one given to seeing nothing from her years of efforts, save for having a last word. And what a last word it is.