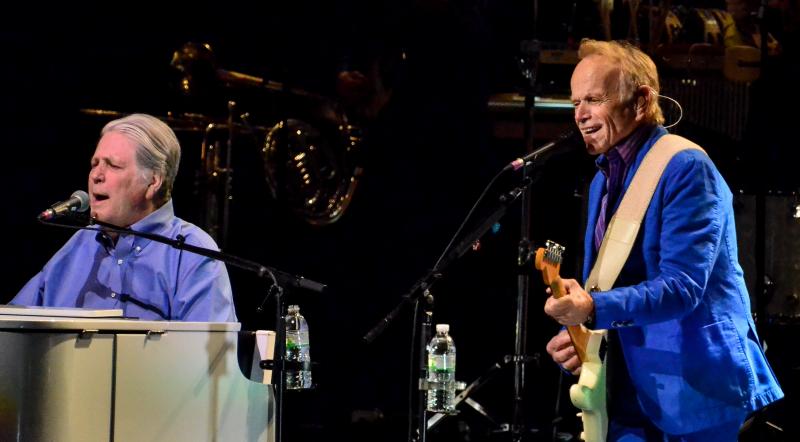 Brian Wilson is a Grammy-winning member of the Rock 'n' Roll Hall of Fame. He is considered to be one of the most influential songwriters of all time. Many see him as a tortured genius. His story is well- known. Wilson is known far and wide as the creative force behind The Beach Boys. His musical vision took the band well beyond the surf and roll formula of music that his father and some other band members wanted to perpetuate. He created mini-symphonies and brought the band to another level. Unfortunately, in the last '60s and early '70s Wilson's mental health deteriorated. He spent years fighting his demons. He eventually recuperated and began recording and performing as a solo artist. He also occasionally returned to perform and record with the Beach Boys (most notably for the group's 50th anniversary celebration and the That's Why God Made the Radio CD released on Capitol Records in 2012). In 2015, a biopic of his life (in which he was portrayed by both Paul Dano and John Cusack), Love & Mercy, was released. The film, directed by Bill Pohlad, received much critical acclaim. Wilson's masterpiece is the Beach Boys' Pet Sounds album (Capitol Records, 1966). Many critics and fans believe that Pet Sounds is the greatest album of all time.

On a warm Saturday evening in late September, Wilson and his band touched down at New York City's Radio City Music Hall for the Pet Sounds 50th Anniversary World Tour: With Al Jardine and Blondie Chaplin. Prior to the start of the show, many fans were seen milling about the legendary venue's lobby discussing Wilson, his legacy and the Beach Boys. Some fans were waiting for friends to arrive at the concert hall by at designated point inside. Others were purchasing limited edition memorabilia, or visiting the concession stands for refreshments and treats. Inside the hall, the stage was bathed in blue light while the loudspeakers played muzak versions of Beach Boys classics.

At shortly after 8pm, the eleven man band appeared and Wilson, who was obviously in a good mood waved to the crowd, bounded across the stage and sat behind his piano. The first thins Wilson did was ask for a little help. He leaned into his microphone and said, "Calling Nick Cruz to the stage. Nick Cruz to the stage, please." Cruz immediately appeared at Wilson's side and helped him adjust his microphone. Wilson then asked the audience to acknowledge Cruz. The roadie/technician then received a rousing ovation.

After getting his rig situated properly Wilson simply stated, "Hello New York City. Hope you enjoy the show. We'll start things off with a Beach Boys' anthem." The familiar opening noted of "California Girls" filled the theater and the show had started on a high note. "Dance, Dance, Dance" and "I Get Around" followed, providing the faithful with an amazing start to the show.

Wilson spent he evening seated at the piano. He was in good spirits. He was talkative introducing many of the songs and the musicians as the show unfolded. He was also in good voice delivering strong vocals that were made more powerful by the harmonies provided by his band which included Beach Boys co-founder Al Jardine.

The first set featured some Beach Boys classic songs ("Shut Down," "Little Deuce Coupe," "In My Room," "Surfer Girl") some nuggets that should have been hits ("Don't Worry Baby" which suffered from being the B-side of "I Get Around" and "Salt Lake City"), some deep cuts from the band's canon ("I'd Love Just Once to See You," "Aren't You Glad," "Let Him Run Wild" and "Darlin' which on this might was sung by keyboardist Darian Sahanaja who Wilson called his "musical secretary") and songs written by other members of the band (Al Jardine's "California Saga," Carl Wilson's "Feel Flows" and a rockin' version of "Wild Honey" both of which were sung by Blondie Chaplin). Chaplin made his appearance toward the end of the first set and in addition to "Feel Flows" and "Wild Honey," he shined on "Sail On Sailor" the 1973 hit from the Beach Boys' Holland album (Brother/Reprise Records).

The second set was, in reality, the main event—the thirteen part song-cycle that is Pet Sounds. Pet Sounds truly was light years ahead of its time. It incorporates symphonic arrangements, pop sensibilities, traditional folky musical influences and unconventional instrumentation as a bed for elaborate layers of vocal harmonies.

Though Wilson is currently 75-years-old, he and lyricist Tony Asher began collaborating on what would become Pet Sounds in December 1965 when he was 23 and Asher was 26. As a result, the album features many songs about growing up and the responsibilities that come along with maturity—in both interpersonal and, of course, romantic relationships. This is very obvious when Mike Jardine, Al's son, sung "Wouldn't It Be Nice" with the "We could be married / Then we could be happy" lyric. It also came through on: "Don't Talk (Put Your Head on My Shoulder) with the "We could live forever tonight / Lets not think about tomorrow" lyric, "I Just Wasn't Made for These Times" on which the protagonist feels like a bit of a misfit, and the plaintive "Caroline, No." The night also featured a bit of nostalgic levity when following "Sloop John B," Al Jardine announced that it was time to flip the album over. The audience chuckled. When Jardine stated that "God Only Knows" was his favorite Brian Wilson song, it was greeted with a standing ovation. Many audience members remained standing and slow-danced as the band played and Wilson sang the song, which is arguably the greatest love song ever written.

The Pet Sounds performance sounded both fresh and timeless. It never sounded dated at any time, in any way. It was wistful, melancholy, orchestral, melodic, soaring and majestic. It was, in a word, glorious.

Following Pet Sounds," Wilson and company wrapped up the evening with a joyous six-song encore of enduring and timeless '60s classics. The mini-set featured the Beach Boys hits "Good Vibrations," "Help Me Rhonda," "Barbara Ann" (which was originally released by the Regents), "Surfin' U.S.A." and "Fun, Fun, Fun." These five songs had had the fans singing along and dancing in the aisles. The mostly middle-aged crowd basically bopped its way back in time as virtually everyone in the audience was transported back her or her youth. The show ended as almost every Brian Wilson performance does, with a powerful version of his solo tune "Love and Mercy." The evening and the performance was special. If this represents the last time that Wilson plays Pet Sounds in New York City, let it be known that the performance was an extraordinary opportunity to see a genius at work.