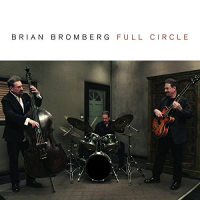 Talk about backstory! There are multiple backstories going on with bass virtuoso Brian Bromberg's Full Circle. The first actually involves Bromberg's back. Full Circle marks Bromberg's return to recording and full-on playing since suffering a debilitating spinal injury several years ago. Always a chops-meister, Bromberg truly projects the sheer joy of music-making throughout. Cutting loose seems like a great thing to do, as Bromberg could barely hold his instruments, let alone play them, even after months of physical therapy and rehabilitation. Now returned to his former strength, Full Circle is also Bromberg's first "true jazz" album. There is obviously some risk involved in such a move, as Bromberg has been, first and foremost, a high-energy jazz-rock fusion artist. Though fans of Bromberg's previous albums may find Full Circle to be a little... um... disorienting, they will certainly be pleased by the virtuosic super-tight playing throughout, guest shots by high-profile artists such as Arturo Sandoval, Kirk Whalum, Mitchel Forman, and Bob Sheppard, and the album's ultra-high-gloss production values.

Backstories two and three are Bromberg's return to drumming after forty-odd years, and the dedication of Full Circle to his dad, Howard Bromberg. It turns out that Brian Bromberg's first instrument was the drum set, on which he modeled himself after his father. Bromberg père was an aspiring bebop drummer who was on the brink of a jazz career when military service took him to Tucson, AZ where he married and started a family. Howard kept his sticks at the ready, playing frequently on the local scene. He taught his sons how to play the drums, as well. Brian, however, fell in love with the bass and the rest—as they say—is history. The album is bookended by two recordings Howard Bromberg made with his Tucson-based band about 65 years ago. Using 21st Century technology Brian was able to isolate his father's drum track, along with the trumpet and trombone of Jimmy Saunders and Phil Washburn, and accompany the trio—via overdubbing—on two classic Dixieland pieces. These tracks stand as a sweet and heartfelt tribute, and they are quite enjoyable.

Brian Bromberg plays drums throughout Full Circle and, as one might anticipate, he is a damned fine tubsman. Interestingly, his kit playing has a sweet behind-the-beat lope, not unlike Billy Hart. Thus, the laid-back CTI-style 1970s jazz of the title track really rings true, though much of the music on Full Circle hearkens back to the blues-based hard-bop style of the mid-to-late 1950s. Much of the music on Full Circle has a Vegas-style razzle dazzle to it. Nearly all of the tracks are up-tempo, and the soloing is slick and acrobatic but never even slightly "outside." The horn section work is so seamless that it takes close listening to "Sneaky Pete" and the cover of Michael Jackson's "Don't Stop Til You Get Enough" to convince oneself that it's not some sort of high tech synthesizer work. Bromberg's bass and piccolo bass work is stunning. On acoustic, he swings hard and relentlessly. A highly melodic soloist with chops for days, he sounds like a cross between Stanley Clarke and Eddie Gomez. He's one of those bassists whose solos never let your attention wander.

The album also bears a humorous disclaimer: "All guitar-sounding tracks are played on piccolo bass." The thing is, it is easy to get lulled into thinking there's a guitarist on Full Circle because Bromberg sounds so much like Wes Montgomery and George Benson. This especially true on the slower-paced tracks such as "Saturday Night in the Village," "Susumu's Blues," and "Bernie's Bop." On the crazy barn-burner "Sneaky Pete," Bromberg's agile, high-intensity piccolo bass work is somewhat reminiscent of Danny Gatton. The cover of "Don't Stop 'Til You Get Enough" is a real tour de force, however, replete with high-precision horn section stabs, great rhythm section work by the one-man rhythm section, and some fine tenor work by Doug Webb. Otmaro Ruiz and Arturo Sandoval both bring Latin jazz authenticity to "Havana Nights," but get upstaged by Bromberg's amazing bass solo. However, Forman and Sheppard nearly steal the show on the title track with back-to-back solos that sparkle with invention and spirit. The only misstep is "Nawlins'" which doesn't really cut it as a second-line thing, nor does it ring true as a zydeco-inspired piece. Fortunately, the attempt at New Orleans rhythm isn't belabored, as Bromberg and his band revert to the lusty swing that is clearly their bread-and-butter.