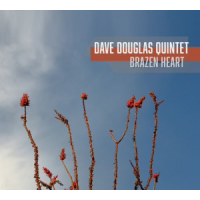 Leading a quintet whose debut recording, Be Still (Greenleaf Music, 2012) was an elegiac song cycle dedicated to his late mother, Dave Douglas' Brazen Heart, sadly, finds the trumpeter / composer in mourning once again. Damon Douglas, Dave's brother, passed away in June 2015. Yet, the overall tenor of Brazen Heart is completely different than Be Still and its direct antecedent Time Travel (Greenleaf Music, 2013). There are no vocals on Brazen Heart. Also, after many months of touring and recording with this band, Douglas is clearly challenging them (and us) knottier, more complicated material. Gone are the "lead sheet" type tunes (did they ever really exist?) Douglas endeavored to write for this band a few years back. Of course, the quintet rises to the occasion and then some. These are, after all, five of the most gifted (and busy) musicians around today. It's miraculous that Douglas has been able to keep the band intact for four years.

The instrumentation remains simple: a classic acoustic jazz quintet lineup. And Douglas' writing for this group, no matter how far it strays from the tried-and-true, remains deeply rooted in the jazz tradition. Though the individual members of the band are actively involved in some truly radical musical experimentation, Douglas seems to prefer other venues for his own experiments with electronics (e.g., High Risk, Greenleaf Music, 2015) and hyphenated genre-crossing hybrid musics. The comforting familiarity of the instrumentation and the inclusion of two gorgeous hymns ("Deep River" and "There is a Balm in Gilead") aside, Brazen Heart is one of Douglas' more risky and adventurous albums. And—if you know Douglas' music—that's saying something.

"Hawaiian Punch," a medium tempo piece that juxtaposes a lengthy, but very pretty, melody against a jagged succession of heavily syncopated unison hits, evokes the music of Thelonious Monk and Herbie Nichols in a highly personal way. Matt Mitchell's comping sounds a tad wayward until you get to his deeply insightful solo. Linda May Han Oh's virtuosic bass improv is similarly on-point. The intellectually funky "Miracle Gro" is no less engaging. Backed by Rudy Royston's sly machinations, everyone takes brief solos over the changes before the massive, ultra-majestic theme kicks in. Here, the solos tend toward the spare and icy-cool, while the thematic material provides the drama. That said, Jon Irabagon manages to whip up quite a lather here. "Inure Phase" is exactly that: super quick tempos, cliffhanging melodic lines, chiaroscuro harmonies, crazy polyrhythms, and Royston's unbelievable drums rolling and crashing all over the place. The closest thing to a ballad among Douglas' new pieces is "Phyrric Apology;" a rhapsodic mid-tempo piece that frames particularly fetching slow-burn solos by Douglas and Irabagon before taking off into the stratosphere. The rest of Douglas' originals are no less bracing, each a showcase for some different aspect of this amazingly talented and soulful band.

The two hymns are understated and tender; contrasting with, yet not incongruous to the brainy dynamism that dominates Brazen Heart. And there's not a whiff of the mawkish or sentimental. Instead, there's a palpable sense of fortitude and gutty resolve at play here. Sure, it's jazz, but on these tracks Douglas and his quintet seem to be channeling the same sort of understated, gospel-inflected mojo that artists such as The Band, Sam Cooke, Van Morrison, and Ben E. King are able to access with stunning regularity. Fittingly, Douglas has chosen to pay tribute to his brother by bravely, brazenly, stepping forward with some of his most advanced and technically challenging music to date.