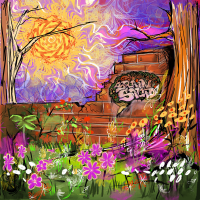 Hell-bent on establishing a jazz fusion group in Nashville, eager to perform not only its smart original music but also the complex works of such high-profile raconteurs as Hiromi, guitarist Mike Stern and Herbie Hancock, Nashville bassist Ben Griego sent the call out through Music City's flourishing jazz underground in the summer of 2018. Brain Salad then gelled organically as guitarist Josh Sendish soon joined, followed by keyboardist Miranda Powell and drummer Felix Munger.

A hardy and robust rock/jazz elation lay at the heart of Brain Salad. Sparked by Sendish's exclamatory hard rock sonics and spiked by fleet fingered keyboardist/pianist Powell, the music might often sound from a particular genre (fusion) or time (think mid-70's early 80's) but the band brings a flaring excitement to their eponymous debut, leaving little doubt they are seeking new ground within still fertile soil, and the harvest is in.

Owing in no small part to the forceful and energetic production of Jared Conrad, the whole disc sparkles, both with ideas and a clean, cutting sound.{ {m: Brain Salad = 125786}} insinuates itself quickly with the jam-band branded "Tiny Bubbles," a burbling, tightly-arranged and even more tightly-performed adrenalin rush. Composed jointly by all four members, the track moves with a meteoric, youthful intensity, as each player gets their time to shine and makes the utmost of it. Call it Fusion 5.0 or whatever generational number we' are up to.

Nothing other than Duke Ellington's "Caravan" follows with a nervy darkness at its center as guest saxophonist Miqui Gutierrez and Sendish erupt from the swirl like exploding objects. Powell then romps and swings on Griego's breezy, easy bouncing "Phatty Bo Bandy," a real retrofit of 70's cool smooth that owes more than a passing nod to the eccentric polarity of Donald Fagen and Walter Becker, aka Steely Dan. Powell owns Hiromi's "Move," interpreting all its lush quirkiness with an expressive understanding of all the composer's many moods. Driven by Griego and Munger's athletic punch, the take is one hot standout. Ditto Griego's closing "A Bird for Jeff" wherein Sendish ballets with guest flautist Alex Graham as the band rushes up behind them like vintage Return to Forever. A most promising start.