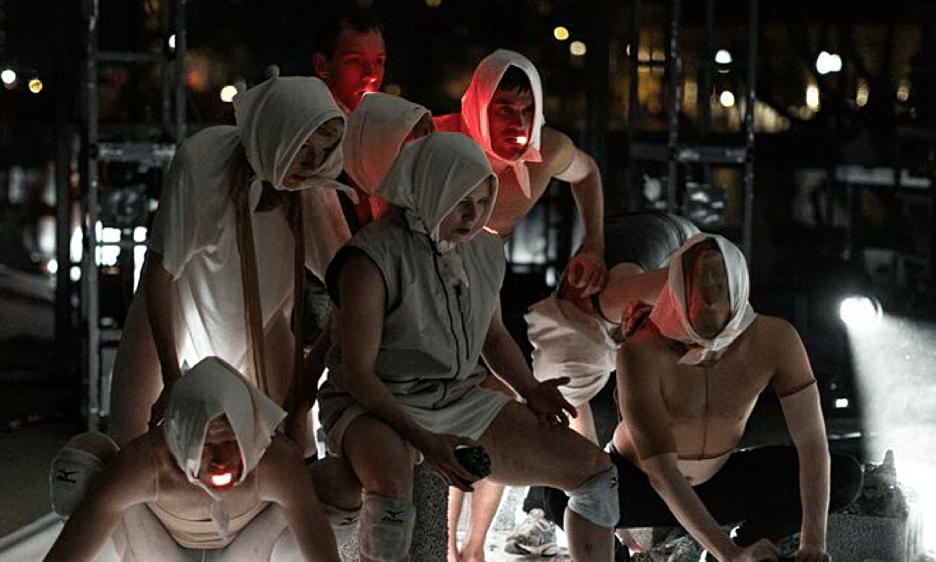 Borealis means 'northern,' so we must be in Norway, for this festival of experimental music, which has been running in rainy Bergen since 2004. Even though, perhaps, the foundational musical forms of this long weekender lie in the moderne, compositional, new music zone, the programme incorporates marked ratios of jazz, free improvisation, punk rock, and electronic music (this latter tipping more towards club and dancefloor manifestations, rather than creeping along academic corridors). These forms are not nailed onto the forehead of avant-garde expression. They are infiltrated like a benign disease, streaked with their own fluorescent colours, in thin, jellied slices of alternate styling. As if this wasn't a sufficiently open-hearted surgery, Borealis also welcomed dance, video, film and performance art, hand-stitching the disciplines.

Mostly from London, the singer Elaine Mitchener and her all-star improvising group gave a performance of her Sweet Tooth, combining music and movement. She chose well, inviting out Jason Yarde (reeds), Sylvia Hallett (voice, violin, accordion) and Mark Sanders (drums, percussion). The BIK theatre is an old school, high-vaulted joint, with an appealing acoustic, the kind of venue that makes it easier for performers to go out a-wandering into the audience, which of course, these four did, taking various routes, at various times, around the rows, up the stairs, and from front to back. The lighting was also suitably evocative. It was soon to become apparent that the Borealis approach to visual framing was invariably sensitive to the surroundings of its host haunts.

Yes, Sweet Tooth concerns the slave trade, with particular reference to the role played by England, so we might expect Mitchener's vocal output to be fraught, but too often she tended to go too far towards controlled screams and shouts, while her accompanying musicians took the subtle path, using their instruments to wash the whole space with continually shifting sound relationships. Thankfully, Mitchener's core sound was more free jazz than free opera. Hallett's underplayed, devilish singing was more effective, as it almost became inseparable from her skating string or breathing bellows activities. Yarde's baritone saxophone belched down from the gallery, then Sanders descended the stage-side stairs while playing them with his sticks. Mitchener ran down the central aisle, and we were all suddenly in the asylum. She kept some of her movements sparse, accentuating breath sounds, moving through a sequence of promenading duos with the three players, intoning a list of sold slaves, and their market pricings, decided by their age and health. Sanders boomed kettle drum, Hallett lilted on accordion. Eventually, all three of the players took time on long bamboo sticks, becoming a sub-group of percussionists.

In the Kode 2 venue, electronics and dance conjoined, the latter crawling towards performance art in some of its moves. Choreographer Ole Martin Meland created Øy (island, in Norwegian), which had an immediate Clockwork Orange feel, transposed to a hybrid zone of disco-techno contortions. The twosome of Smerz sat nonchalantly at the mixing desk, triggering harsh cutthroat beat-bursts, but in turn, operating as reclined singer-songwriter balladeers, garbed as if they were working on a hotel reception. Catharina Stoltenberg sat, legs-crossed, microphone held casually, singing coolly from the desk, softly against hard electro-gristle from Henriette Motzfeldt. The duo also spent some time on violin and upright piano.

The Carte Blanche dancers invaded the expansive performing floor as if they were at a nightclub, professionals suddenly deciding to take over the room. They stood rooted whilst quivering, jerking or spasming, they ran around on imaginary missions, they completely colonised the area. All of them took individual tangents, but intersecting at regular node-points. It looked like improvisation was encouraged, revolving around the chosen 'character' of each dancer. They all made good use of their knee-protectors.

There was a point where the performance wound down into what appeared to be its conclusion, slowing, dying, flopping, but then it began to intensify by degrees, moving closer to performance art, as breeze blocks were hefted around the floor, water transferred into buckets, a long-hair dip resulting in sopping floor-slapping, head turned side-to-side, and then ultimately, a handy pneumatic drill appeared, to make rubble out of the blocks. These actions created a tension of lost control, as the audience might have wondered whether the dreaded health/safety regulations had been well and truly dismissed. Carte Blanche were moving close to the edge, to the audience, physically, and to the limits of previously experienced choreography.

Several arts venues surround the octagonal lake of Lille Lungegårdsvannet, so it was only a few steps from Kode 2 to Landmark, for a late night eight-speaker electroacoustic triple bill. Nina Pixel had a cello by her side, but only used it in the most vestigial manner, presumably to sample string-stroking residues. This Slovakian artist kept her sonics subtle, but was cruelly interrupted by what was surely a crashing laptop. Although she'd played for a while, it still seemed like coitus interruptus when she was taken by surprise, music abruptly cut.

John Chantler presented a piece that was closest in feel to trad electroacoustic, working at the mixing desk, dispersing sounds more noticeably around the space. Your scribe found himself in the unusual position of sitting to the side of this Australian's laptop, thus observing the visual progress of the digital tracking.

From South Korea, originally, cellist Okkyung Lee works in many areas, this time playing her instrument alongside a laptop composition, heavily effected, and not always distinguishable, as each contribution merged. Even though all three of these players have worked within academic electroacoustic portals, their resultant works had the character of being let out in the populist territories of dance music or noise/drone zones.

The next morning, at the frighteningly early hour of 11am, it was an uphill trek to the newly-reopened Natural History Museum, and even higher, to its top-roost room in the tower, a refurbished woody retreat that has been closed to the public for a century. Now, it will open on special occasions, such as this performance by Ensemble Avgarde, in a programme of new composition from western Norway.

The best piece was "Align 2.0," by Gunhild Seim, it's slow time hinting at a march, with whistling tones, a sparse skitter of drums, a huffing bassoon, and a lurching accordion motion. It sped up, waddling, with cutting ice-clarinet, trilling with a slow-circling breath, sandblocks gently rubbed. Almost as good was Marius Neset's ""Wildlife," which gave this concert its title. The full five-piece was employed, with marimba, cultivating a darker, melancholic folk-tone, accordion leading a village party. Neset crafted a pastoral, spring sound, capering with its visual senses alert. The bassoon played on percussive qualities, and the marimba took the lead flow, the composition being enjoyably traditional, in the end. Neset was in the house to take the applause, standing next to the room's towering pillar of carefully bricked tomes.

On the Saturday early evening, Saint Jakob Church hosted a gig by YrrY, a trio of one female singer and two dudes sharing a massive bass drum, with a tendency to load up a massive number of found objects onto its stretched skin, in the name of both sound and vision. The best of the four premiered works was the climactic "All We Own/And Now This," by Eva Pfitzenmaier, where the threesome took the skin-load-up concept to its ultimate conclusion, piling up a teetering sculpture of objects, topped by cushions, boxes, umbrella and pram. Here was another manifestation of the Borealis attention to visuals, lighting, and surprising actions.

Next, at Studio Bergen, the BIT20 Ensemble were led by composer Knut Vaage, with his new work, "Hybrid Spectacle," featuring a large cast of acoustic players, funnelled through the electronic processing of John Hegre. An insistent, frantic riff grew amongst the strings, caught up by the horns, marimba and harp adding colour. Hegre lurked at the rear of the auditorium, making sample capturings, formulating a bathyspheric groaning. Three screens switched between altered images of the real-time performance, and graphic constructions, soon to be overwritten by repeating laser scribbles. All of this was quite ambitious and quite successful, but in the end, a factor of true innovation was absent, making the piece seem a touch too lengthy, and not quite uniting its diverse aspects.

Another late night session at Landmark. At first, Blóm looked like a Norwegian outfit, but it turned out that this punk garage combo were from just across the sea, in Newcastle-upon-Tyne, north-east England. Also, their first few numbers made them sound like a standard shouty nihilism crew, but then singer Helen Walkinshaw gradually unveiled a cumulative ascendancy, a ceaseless virtuosity that brooked no pause, as she paced around the club-crowds. Bassist Erika was ostensibly a low-stringer, but we marvelled at the multi-level of lines, including rhythm guitar and solo guitar, all happening in a multi-tiered gush. Meanwhile, drummer Liz McDade piledrove at an intense rate, making precise bombardment punctuations.

MC Yallah also played a strong set, a Kenyan rapper-singer, living in Uganda, and part of the ever-influential Nyege Nyege collective. The sonics were provided by French laptopper Debmaster, and the combination was successful for a fair portion of time, although their set did sound extra- lengthy, and eventually extra-one dimensional, compared with all the other late night acts over the two Landmark sessions.

Bright and early again, at 11am on Sunday morning, for the beginning of an epic opera called Sun & Sea, created by the Lithuanian trio of Rugilė Barzdžiukaitė (director/set design), Lina Lapelytė (composer) and Vaiva Grainytė (libretto). The KMD venue had its lower floor covered in sand, transformed into a complete beach environment, the performers spread out on their towels, mostly reclining as they relaxedly delivered their songs, to a minimalist synthesiser patterning that continually progressed its pulse. This was an opera for those who can't abide with the form, developing via Philip Glass duration, but sounding closest to the softly enunciated works of Robert Ashley, as its songs were nonchalantly expressed, mostly from a supine lounging position. The audience inhabited the venue's upper gallery area, looking down upon the beach scenario, taking moments to locate the next singer, as all of them worked from a flattened position. The book cycled around, each song eventually repeating, merging into its surround, so maybe 90 minutes was an ideal time for sufficient reprises, but the audience could have remained until 4pm, if so desired. The most compulsive work was "Song Of Exhaustion: Workaholic's Song," which came around a few times, performed by an exceedingly relaxed singer on a camp bed, one leg dangled down onto the sand. Outside, a constant downpour that was heavy, even for Bergen, added an extra, natural element of disconnection.