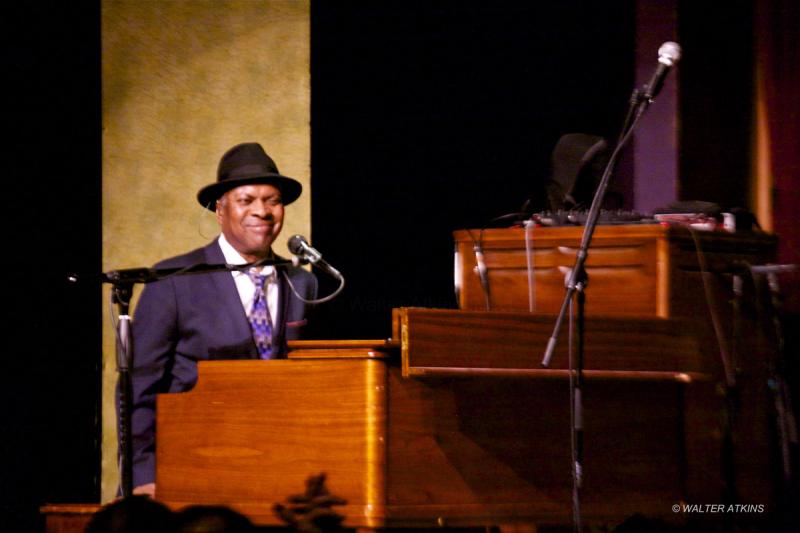 By Walter Atkins
February 20, 2016
Sign in to view read count

Jones presented a poignant rendition of Prince’s signature composition “Purple Rain” with the younger Jones in a duet.
—Walter Atkins

The esteemed Booker T. Jones and his band performed in front of a sold out house at Yoshi's in Oakland. He presented a set of Booker T. & the MGs vintage originals mixed in with some popular songs from artists he has admired and respected over the years. His stellar guitar centric group included Vernon Black and Ted Jones on guitars, drummer Darian Gray, and bassist Melvin Brannon.

During Friday night's second show, the composer/bandleader mentioned the legendary Albert King and other iconic artists throughout the session. The Lifetime Grammy Achievement winner and Rock and Roll Hall of Fame member commented on growing up in Memphis, "It was a great place to be if you wanted to be a musician."

Jones talked about meeting Jimi Hendrix for the first time when the young guitar paragon was playing with the Isley Brothers. He would later see Hendrix again fronting The Jimi Hendrix Experience at the fabled 1967 Monterey Pop Festival. Upon landing in San Francisco, Jones was picked up by the Hells' Angels and escorted to the MPF. He played a stirring "Hey Joe" in memory of Jimi. While adjusting his guitar, he commented Crosby, Stills, Nash and Young were responsible for his "tuning the wrong way."

The revered Otis Redding was his "best friend" and Jones performed his arrangement of the timeless anthem "Respect" with son Ted providing a blistering guitar solo along with another scorcher from the outgoing veteran Black.

He talked about recording at seventeen his 1967 colossal hit "Green Onions," one of his first major records as leader of Booker T & the MGs. The audience lit up with instant recognition and joyful approval. Jones new arrangement of his "Hip Hugger" included an updated twist with drummer Gray providing a smooth funky rap. People cheered vigorously and whistled wildly." if you're feeling all right, say so," added the multi instrumentalist. Yoshi's has consistently drawn a solid Bay Area audience for decades. Mark and Ingrid, a pleasant couple from San Francisco, shared their experiences growing up in the city and attending local high schools.

Due to a contract dispute, the distinguished Jones left Stax Records and Memphis headed to sunny Southern California. He purchased Hollywood actress Lana Turner's "old ranch in Malibu" where his neighbor just happened to be Bob Dylan. The highly productive song writer convinced Jones to bring his bass to a recording session where he played on Dylan's well-received "Knocking On Heavens Door" for the 1973 "Pat Garrett and Billy the Kid" movie soundtrack. Dylan was also in the film with Kris Kristofferson.

A Beatles fan, Jones said he saw them at the Bag of Nails, a pub in England. After hearing the influential "Abbey Road," he recorded an album of Beatles songs titled "McLemore Avenue" (Stax 1970) complete with a street crossing cover photo. He was "still a Beatles fan" and glided into "Don't Let Me Down."

Jones presented a poignant rendition of Prince's signature composition "Purple Rain" with the younger Jones in a duet. Father and son traded verses and soulful guitar licks. Guitarist/singer Black provided timely background vocals during the song. A father's quiet pride was clearly evident on stage. The elder Jones thanked the spirited Friday evening crowd for "coming down to hear us."

From the 1968 movie "Uptight," Jones and company played the muscular "Time is Tight." On this fresh arrangement, he started it off with an extended Hammond B3 organ introduction that slowly built up with grace and power to a thunderous finish. "Time" generated an intense standing ovation with near deafening clapping, whistles and hoots from the energized attendees.

Jones then fired up Outcast's electrifying funk/rock track "Hey Ya." The 2003 platinum hit single was fueled by the band's rolling bottom beat. Jones flowed into Redding's essential soulful ballad "Loving You Too Long" from 1965. The prominent artist started on the robust organ, then surprised everyone by getting up and taking center stage to continue on his guitar.

Booker T. Jones took the audience down a nostalgic and satisfying road of his MGs standards and selected songs by his favorite musicians. Decades later, his early works still resonated with strong memories and emotions. His personal stories about some of the music world's most enduring artists helped to highlight his unique position at the nexus of soul, rock, gospel and other genres.