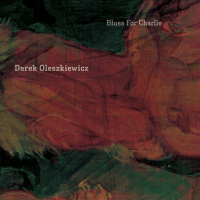 The serious jazz musician or listener will tell you that to hear the music that prolific bassist Charlie Haden left us, is to be given a rare gift. Haden's extraordinary abilities first made an impact in the 1950s. Perhaps best known for his work with the Ornette Coleman Quartet, Haden's most influential mark was in the form of improvisation. He was a pioneer in pushing the bassist role beyond rudimentary rhythms and becoming an integral part of the band's conversation. He had much to say with his instrument, whether interacting with others or as a soloist.

Sometimes one musician is fortunate enough to have a telepathic connection with another; to have the spirit and intent of a musician reach out in a personal way; the manner of synergy in which Chick Corea is aligned with Thelonious Monk is a prime example. Finnish bassist Darek Oleszkiewicz (often shortened to Oles) does more than pay tribute to Haden on Blues for Charlie. He is at one with the legend throughout this record. He is also at one with his instrument, as this is a solo rendering. Originals are placed and paced alongside Haden and Coleman tunes.

The record opens with a brief mood enhancer. Coleman's "Law Years" sets the table for a dynamic take on "Body and Soul." Oleszkiewicz is in no rush to get to the finish line. Instead, weaving his way slowly as to engage every note and savor every ounce of feeling. It's a jazz standard that most people have heard in a myriad of styles, but not like this. It is most impressive to redefine a classic tune in this manner. Coleman is revisited on "Lonely Woman." Although written by Coleman, it is a song generally connected to Haden's perilous journey. Oleszkiewicz leads the listener through his own journey with substantial Haden-esque note derivatives and substantial rooting and growth from his own garden.

The title track, the first original composition on the record, is batting clean-up. At this point, one might expect a heartfelt, yet weepy and dour homage. Instead, it celebrates Haden's life and genius. Oleszkiewicz derives the pleasure of passion and precision in a hearty and robust piece. Played with zeal for sure, it is the compositional strength that is also most noteworthy. The first song on the record written by Haden, coincidentally entitled "First Song," follows. It abundantly features the type of improvisational elements referred to earlier. A sad song, it is touched with languor and vulnerability. Later in the song, you can hear the bass cry and feel the tears. A remarkable performance as a musician and as a man tapping into a moment of emotional desperation. "Solid Jackson!" is the next original, saluting Haden. Oleszkiewicz continues to mix it up by now bopping into a percussion heavy effort with groove variations and enough changes to keep even Cher's wardrobe department happy. There is such a dearth of melodic diversions that you sometimes forget that you are listening to just one player on a solo record. A well-respected Haden tune called "Silence" is up next. Oleszkiewicz opted not to reinvent the wheel and played the hauntingly beautiful Haden song much as Haden had. No foreseeable value in rearranging perfection, and a sincere way to keep the mood and understanding of Haden's temperance intact with consideration to the flow and dynamics of this record.

Kicking it up a notch late in the record, the upbeat "Pocket Full of Cherry" is snapped into place with a mix of power and grace. One of the liveliest tunes in the Haden catalogue, it is here full of head popping jive. Oleszkiewicz romps into full tempo swing with a virtuosic touch. He closes out the tribute with the contemplative lilt of his own "Modlitwa." This thoughtful piece has a gentle and soothing spark to it. It's the kind of tune you may wish didn't have to come to an end. That sentiment could perhaps apply to the entire record.

If Oleszkiewicz set out to accomplish both a tribute to Haden, and a very fine record, to enjoy in its own right, then this perspective is that he succeeded with flying colors. Haden was a warm toned player, with lyrical subtleties, and strong harmonic proclivities. Oleszkiewicz naturally was well-aware of that, and did the jazz world a service by, depending on your age, reminding us of that, or awakening you to an important figure in jazz history.