By Woodrow Wilkins
April 2, 2009
Sign in to view read count 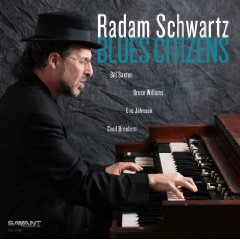 One of the cool things about the relationship between jazz and blues is that both genres grew from the same emotional roots. At times, the only clear distinction is a subtle change in how notes are played. Is it jazz that sounds like the blues, or is it blues that sounds like jazz? On Hammond organist Radam Schwartz's Blues Citizens, the answer could be either—or both.

"Dem Philadelphia Organ Blues" is textbook feel-good music. With Brooks' stick handling and Johnson's rhythm guitar, the saxophone duet leads while Schwartz uses the organ both for his share of the rhythm and to cover the bass line. Williams punches in a lively alto solo, with Schwartz and Johnson also enjoying features.

The title song struts along, with organ and cymbals in sync while the saxophones deliver a sassy melody. After Williams' solo and a repeat of the melody and chorus, Schwartz shows off, helped largely by Brooks.

The blues are in force on "I Don't Stand a Ghost of a Chance." The organ introduction sounds like a warm-up for a funeral. Saxton's tenor is brooding in the lead, particularly when it reaches its depth. Schwartz, Johnson and Brooks softly underscore, and Johnson also solos.

A true jazz fan also appreciates the blues, and vice-versa. Blues Citizens is an example of what's in store when the genres meet.