BY STUART BROOMER
April 2, 2009
Sign in to view read count 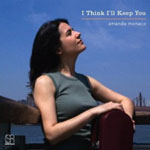 Amanda Monaco is a guitarist whose style is deeply rooted in her instrument's lyrical lineage, at times channeling the singing tone of Jim Hall, at others declaring her own, more forceful sound. Most of the tunes here are Monaco originals and she's created efficient vehicles for both her own voice and the collective dialogues that seem to come so naturally to her quartet.

Monaco's affinity with Hall is especially evident in the tremendous swing she can generate with light textures, as on her ballad "So Much for Spring," and on the very boppish "It's Like This, See," likely an invocation of the film noir connections of modern jazz. saxophonist Michael Attias—a superb frontline partner, whether he's matching Monaco's quiet force with his sweetly open-toned alto on the opening title tune or generating great soulful blasts with his baritone on the funky "Hckhh Blues" or "Haifalutin," a punning invocation of Israeli roots music.

There is both spark and sparkle here, the group consistently motivated by Satoshi Takeishi's drumming-in-the-foreground and Sean Conly's tuneful bass, extending the same camaraderie evident with Attias on Conly's recent debut as leader, Re-Action (Clean Feed, 2008). The easy familiarity that Monaco and her partners develop on the originals is even more apparent on the standards, ranging from her warmly floating, unaccompanied chord solo on "Darn That Dream" to a version of "You and the Night and the Music" that swings between gentle elation and subtly pensive tones. Fats Waller's "Jitterbug Waltz" happily declares connections to the Swing Era, though it could also touch on the Eric Dolphy version.

I Think I'll Keep You; Slinky; So Much for Spring; Hckhh Blues; Jitterbug Waltz; Darn that Dream; Co-op Shift; You and the Night and the Music; Haifalutin; It's Like This, See....